Can Klopp Emulate Benitez in Europe? 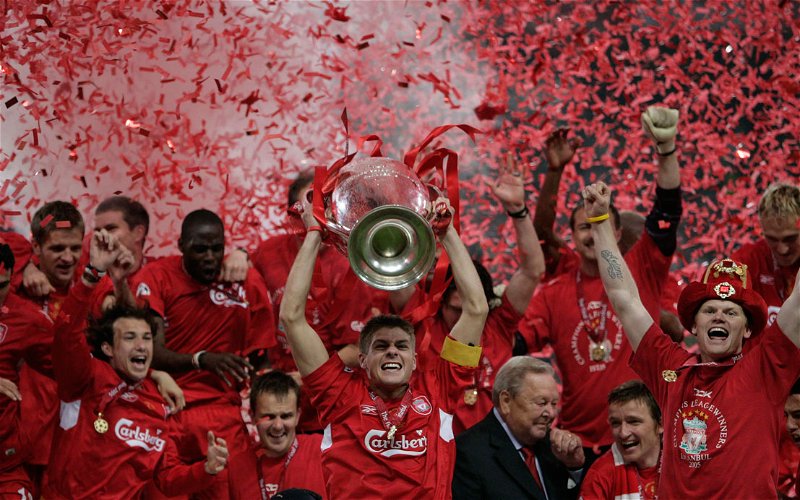 2005 will never go away for Liverpool fans. That night in Istanbul was glorious, and showcased the passion, determination, commitment and skill of Liverpool Football Club at its maximum (after half-time).

Yet new stories need to be made, as Liverpool prepare to return once again to the glamour of the Champions League knockout stages.

The Reds have not progressed to this stage of the competition since 2009, when the heady days of the Rafael Benitez era were drawing to a close. Under the Spaniard, Liverpool won the Champions League in Benitez’s first season at the club, before reaching another final in 2007, a semi-final in 2008 and a quarter-final in 2009.

All of those runs in Europe’s premier club competition resulted in a long list of illustrious names falling victim to Benitez’s Liverpool side. Juventus, Barcelona, Inter Milan, Arsenal, Real Madrid, Chelsea (twice) and, most notably, AC Milan all ended up as the supporting act to great nights in Liverpool’s recent history.

Since, Liverpool have barely managed to qualify for the Champions League, and have struggled badly whenever they have managed to appear in the group stages, finishing third in their group in 2010 and 2014.

In 2017, under Jurgen Klopp, the five-time European Cup winners finally managed to navigate their way back to the last 16, finishing top of a group that included the Reds’ recent nemesis Sevilla, Russian champions Spartak Moscow and Slovenian minnows Maribor.

Now, Liverpool face a tie against FC Porto. The Portuguese giants are currently leading the way in their domestic league, with a two point lead over Benfica and Sporting Lisbon, plus a game in hand. Porto are a constant presence in the knockout stages of the Champions League but rarely reach the quarter-finals or beyond.

Easy victory then? Certainly not.

If Liverpool underestimate Porto, as they have with the likes of Basel, Ludogorets, Lyon and Fiorentina in the Champions League in recent years, then they will be quickly eliminated.

Yes, Porto are not Barcelona, Real Madrid or Bayern Munich, but they are a capable side with far more experience of the Champions League then the current Liverpool side have as a team.

Players from Porto and Benfica are regularly snapped up by Europe’s leading sides after the Portuguese giants unearth potential stars, often from South America.

Porto’s current squad boasts some seriously impressive names, as they attempt to reclaim the Portuguese league title from Benfica this season. From experienced campaigners such as Iker Casillas, Héctor Herrera and Yacine Brahimi to those heavily linked with a move away to one of the big five leagues in Europe, including Vincent Aboubakar and Alex Telles, Porto have a side that could easily beat Liverpool if Klopp’s Reds are not on their game.

Yet they should be. You have to go back nine years to find the last time Liverpool reached the quarter-finals of the Champions League, and a decade for the semi-finals. As the Reds look to re-establish themselves as a leading force under Klopp, consistent progression in the Champions League is vital, so the incentive is unquestionably there.

Moreover, these Liverpool players will want to prove themselves at the highest level, and there is no bigger stage than the latter stages of the Champions League, where the biggest clubs forge their image, identity and history. Liverpool know this better than most – certainly more than any other English club.

It is that history which has helped Liverpool remain relevant as the wait for a Premier League title threatens to extend into a fourth decade, while the Reds have only won one European Cup in thirty-four years.

Yet that one triumph elevated the club into a position where, under Benitez, they could consider themselves one of the very best sides in Europe, always challenging for the biggest prizes, even if they missed out more than they would have liked.

Liverpool lost that touch when Benitez left – even before – but again their history and image of a sleeping giant with a passionate fanbase remained, occasionally threatening to burst back into the limelight, particularly during the Premier League near-miss of 2014.

Klopp was attracted to Liverpool because of the opportunity to re-ignite a truly global club steeped in history and tradition, for better and worse.

The German is trying his best, and Liverpool are progressing, but Klopp’s team lacks the nous and spine of Benitez’s disciplined outfit, even if the current Liverpool side possesses greater attacking flair.

All of the above is needed to win trophies, as the great Liverpool sides of the 1970s and 80s would attest, and the Champions League provides the ultimate test for all of these credentials.

If you succeed in the Champions League, then your peer group across European football will be rather limited. Quality, rather than consistency, is the ultimate barometer of the European Cup when compared to a league title.

Liverpool would like to win both again in the near future, but the title is too far away for this year, thanks to Manchester City’s incredible dominance.

A sixth European Cup is not however. The road to Kiev will be long and arduous – but, most importantly, begins in Portugal on Wednesday night.