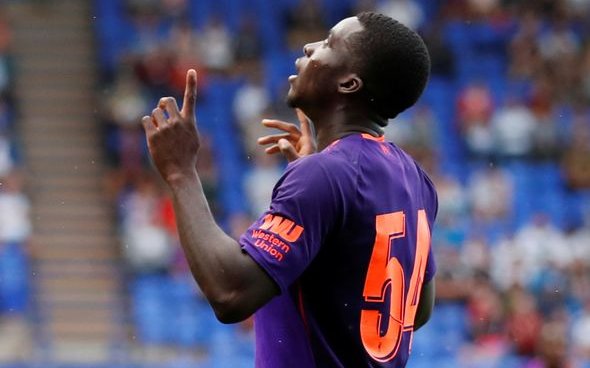 Liverpool’s coffers have taken a big hit this summer after the club splashed out around £160million on four new faces.

It has been an impressive summer of spending from the Reds as they attempt to push on from a season which saw them return to the top table of elite European football.

However, spending like this is not sustainable in the long run with Financial Fair Play in place, and the club will need to bring in some funds from player sales in the final days before the window shuts.

Players such as Danny Ings and Sheyi Ojo are likely to be sold on in the coming days, and it is a deal for the latter which has caught the attention of the press on Sunday.

As reported by The Sun, the Reds are in talks with Championship side Middlesbrough over an exit for speedy winger Ojo, with the touted fee being around £10million.

Boro are said to want Ojo as a replacement for Adama Traore, who looks likely to join Wolves for £18million this summer, and Liverpool are willing to sell their academy graduate for the right price.

And, if Boro are willing to pay £10million for the 21-year-old, then that is most certainly the right price for the Anfield club.

Liverpool bosses will be laughing all the way to the bank if they can get that much money for Ojo, who has shown little evidence that he will break into the first-team at Anfield.

The winger had an unsuccessful spell at Fulham in the Championship last season, and despite impressing in pre-season with the Reds, the path to the first-team does not look possible for the youngster.

That means that a sale is the best option for all parties, and one at £10million is likely to be the very best that Liverpool could hope for.

The Reds must now try and push through this deal as quickly as possible to recoup some cash and move an academy youngster on whose time at the club is coming to an end.