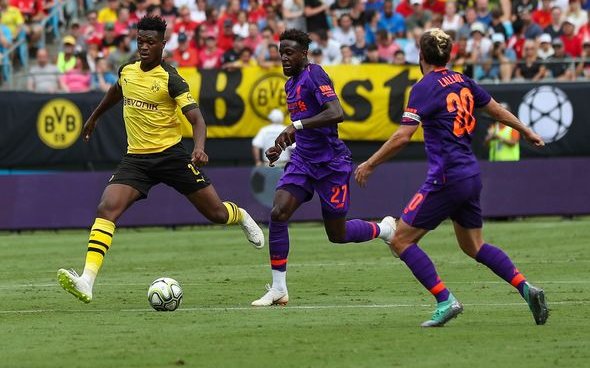 Playing for a big club like Liverpool undoubtedly has its pressures, and the lack of ability to perform will often have major consequences for the player concerned.

One player who has experienced this is striker Divock Origi, who was farmed out on loan to Bundesliga club Wolfsburg last summer, netting seven goals in the process.

The Mirror’s live blog [6.21am] has reported that Watford are keen on the unwanted forward, and are weighing up a move to bring the 23-year-old to Vicarage Road this summer on loan, despite being boosted by Richarlison’s £40 million move to Everton.

The Reds must take advantage of this situation, and bin the unwanted young striker in favour of a move to Watford.

Boss Jurgen Klopp already has an array of attacking stars at his disposal, and is willing take another chance on Daniel Sturridge, while also having Dominic Solanke to call upon if needed.

This is not even including the lethal front three that includes Mo Salah, further reinforcing the fact that Origi does not have a future at Anfield with opportunities incredibly limited.

The youngster would not even make it as a fringe player at the club with the amount of talent they have, and there is no point keeping him on the books if he is just going to sit in the background.

Klopp wants him to leave on a permanent basis this summer, and it may take some convincing to persuade Watford to part ways with their cash for Origi. They need extra attacking reinforcements, so what better way to do that than take a forward off Liverpool’s hands permanently.

With the Belgian not getting near the first team any time soon and a club being interested, now could not be a better time for the Reds to bin the youngster and recoup some cash after their heavy spending this summer.