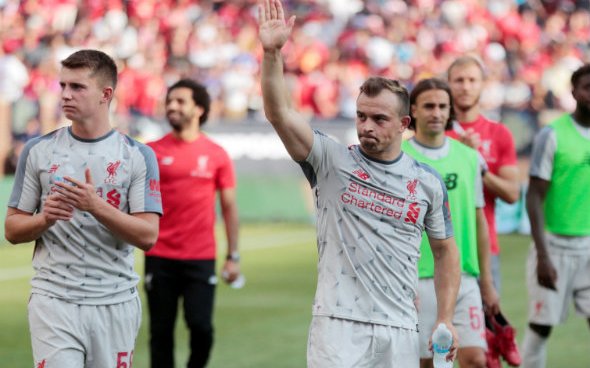 The Reds icon compared the two Premier League rivals ahead of the new season starting shortly and suggested that both would be used as potential game-changers who could make an impact from the bench for their sides.

While Manchester City were believed to have spent £60million (Source: BBC) on prying Mahrez away from Leicester City, the Reds were thought to have only spent £13million on Shaqiri (As per: BBC) due to a release clause in his Stoke City contract.

“Guardiola has not made many signings,” wrote Souness in his column for The Times.

“However, I would describe Mahrez as an icing-on-the-cake transfer. Mahrez is a game-changer who comes off the bench when matches are tight and offers something cute and clever to win them for you.

“Liverpool have signed Xherdan Shaqiri from Stoke to do much the same sort of thing.”

“Like Mahrez, there’s not much risk involved in signing the Switzerland international because they have both played in the Premier League for several seasons and proven that they can handle it.”

It’s interesting that Souness likens the Reds’ capture of Shaqiri to Man City’s recruitment of Mahrez this summer as their price tags are significantly different. This comparison simply proves that the 26-year-old could turn out to be a bargain for Jurgen Klopp’s team if he delivers the goods that he is capable of. The good news is that based on his pre-season outings for the Reds so far, Shaqiri looks like being better than expected and could be more than just a player to use from the bench. The winger has all the tricks in his arsenal in order to get Reds supporters out of their seats and could very well prove to be a player that could help the Reds lift silverware in the upcoming campaign. Souness is right to suggest that both Man City and the Reds have been smart by recruiting proven Premier League players as they should both be able to settle into their new clubs very quickly for that reason.