Rangers manager and Liverpool legend Steven Gerrard sent a message to Bobby Duncan after he featured for Jurgen Klopp’s side against Tranmere Rovers.

The 18-year-old forward was brought on at half-time during the Reds’ pre-season friendly with Tranmere and scored in the 67th minute of the match to help them win 6-0.

Duncan celebrated making his first appearance for the senior team in pre-season by taking to his verified Instagram account to share it was a dream come true.

Duncan’s post saw his cousin, and Liverpool legend, Gerrard send him a three-word message of support as he said “well done kid” via his personal Instagram account. 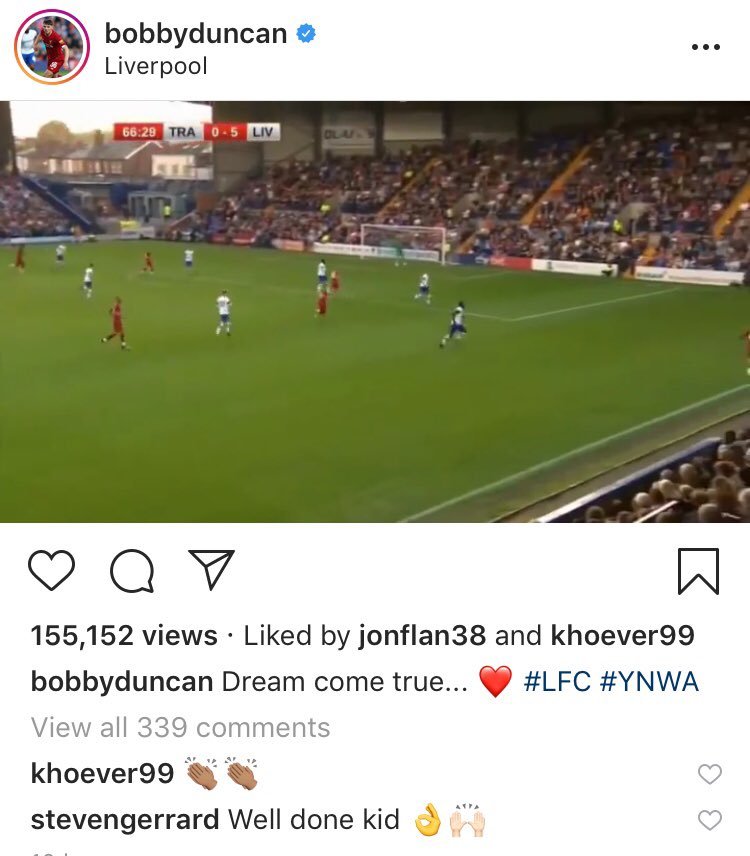 Liverpool’s first pre-season friendly against Tranmere was a roaring success as not only did they dominate possession by having 69% of the ball, as per Sky Sports, and secure an emphatic win; but several talented youngsters took their opportunity to show Jurgen Klopp what they were capable of. One of these youngsters was Duncan. The 18-year-old may have only been given 45 minutes to showcase his talents, but he wasted no time catching Klopp’s eye. Duncan kept surging forward whenever he could and it was no surprise to see him rewarded with a goal. The teenager proved himself to be prolific for the Reds’ U-18s last season after all. Duncan scored 18 goals in 20 outings in the U-18s Premier League and even contributed six assists to the cause. While the thought of a prolific threat like Duncan potentially be utilised by the first-team next season is an exciting prospect, the 18-year-old’s aim should be to continue wowing for the U-18s and for him to perhaps target making the step up to the U-23s side.