Southampton midfielder Mario Lemina favours a summer transfer to Manchester United over Liverpool and Arsenal, according to journalist Kaustubh Pandey.

The Calcio Mercato reporter revealed the news on his personal Twitter account on Wednesday, claiming that a source close to the Gabon international informed him that he is leaning towards the Red Devils.

The 25-year-old is pushing for a move away from the St Mary’s Stadium, despite the fact that he has largely failed to live up to the hype since his transfer to the south coast from Juventus two years ago.

I've been told by someone close to Mario Lemina that the player is pushing for a move to #MUFC and prefers a move to Old Trafford over potential moves to Liverpool or Arsenal.

Will there be many Liverpool supporters upset at this news? It’s very hard to imagine there would be. Lemina is a decent footballer – you don’t play for Marseille and Juventus without being pretty tidy – but he’s never really lit it up since making the move to Southampton in 2017. Plus, the Reds are extremely well stocked in central midfield. They have Fabinho, Jordan Henderson, Georginio Wijnaldum, Alex Oxlade-Chamberlain, James Milner, Naby Keita, Xherdan Shaqiri and Adam Lallana who can all play in the midfield three, so what would Jurgen Klopp need with Lemina? His performances last season don’t compare well with Liverpool’s first choice midfield trio, either. As per WhoScored, he failed to lead Fabinho, Henderson and Wijnaldum in any major statistical category, trailing them all in average passes per game, to boot. So he wouldn’t represent an upgrade on what Klopp already has. So as far as the German is concerned, he might as well pack Lemina’s bags for Manchester. 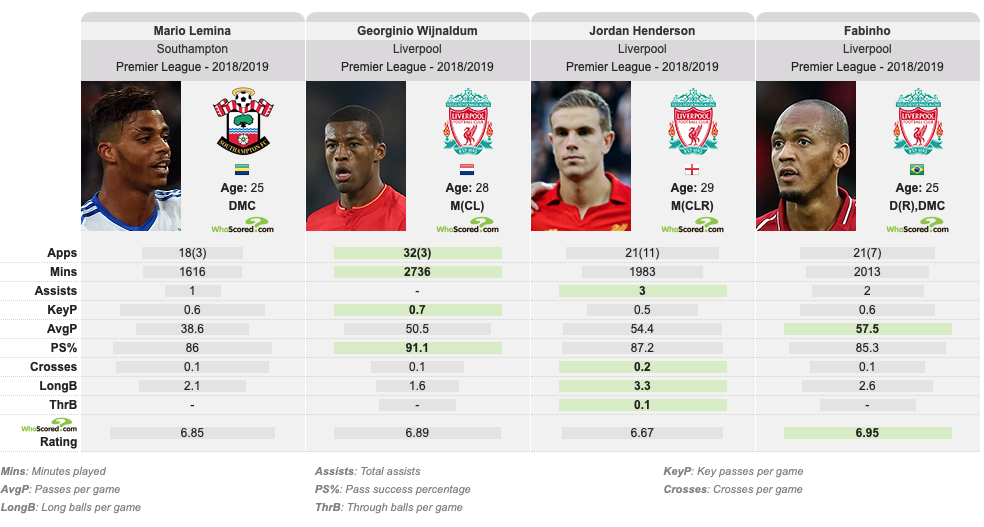