Ex-Real Sociedad player Alberto Lopez has claimed that he can see Mikel Oyarzabal playing for Liverpool at some point in the future.

Oyarzabal, 22, is set to leave Real Sociedad this summer, according to the Mirror, after he played a key role in helping Spain’s Under-21s win the European Championships in Italy.

Amid the speculation surrounding Oyarzabal’s future at the La Liga side, Lopez has delivered a gushing verdict on the young attacker and claims that he would be a good fit at either Liverpool or top-six rivals Chelsea.

“I really rate him. I don’t think he has a lot of time left at Real Sociedad. He has so much talent and I think he could play in a great team like Chelsea and Liverpool,” Lopez told Marca, as translated by the Mirror.

Lopez certainly isn’t wrong and Michael Edwards could play a blinder if the was able to sign the two-times Spain international at some point this summer or in the future.

Oyarzabal was in fine form for Real Sociedad last season as he scored 14 goals and supplied four assists in 41 appearances across all competitions.

The Eibar-born dazzler played on both wings for Sociedad and also featured in the number 10 role behind the striker – an area which Liverpool could perhaps do with some adding some strength in depth to before next season kicks off.

Oyarzabal was also handed the captain’s armband to wear on numerous occasions as he led Sociedad to La Liga victories against Real Betis, Getafe and Real Madrid.

He is someone who still has a lot of potential to reach and could prove to be a great back-up option for Jurgen Klopp next season as Liverpool aim to defend their Champions League crown and push for their first-ever Premier League title.

Liverpool do not have too many options in the wide areas away from their starters Sadio Mane and Mohamed Salah.

Xherdan Shaqiri is perhaps the next player in the pecking order but according to stats by WhoScored, Oyarzabal may be a better option than the Switzerland international. 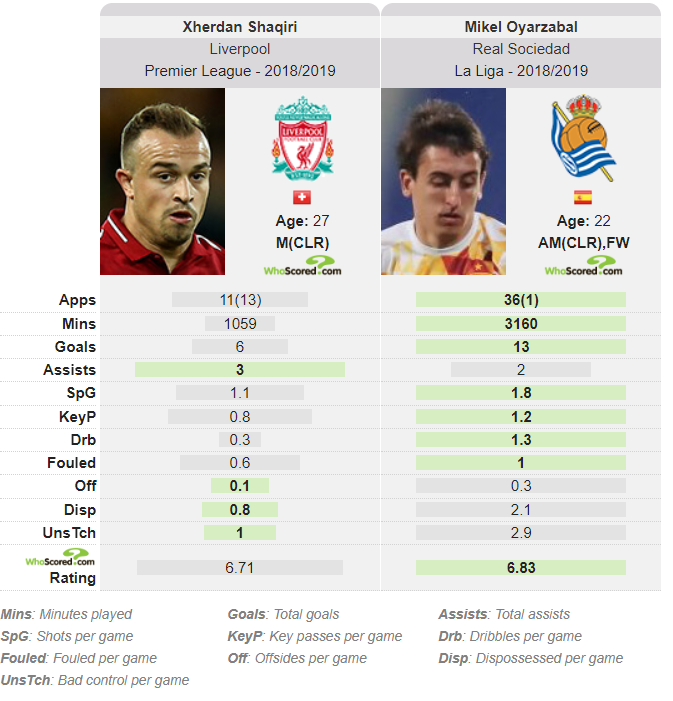 It’s not hard to see why Lopez speaks so highly of Oyarzabal.

The Spanish youngster averaged more shots at goal, more key passes and more dribbles per league appearance than Shaqiri last season, plus he is also five years younger and bound to represent more of an investment for the Reds if they do sign him.

Striking a deal with Sociedad may be costly though as he reportedly has a release clause of £45.1million.

However to get players like Oyarzabal is bound to be expensive, and that is why sporting director Edwards needs to push on to sign the winger before someone else swoops in and strikes a deal.