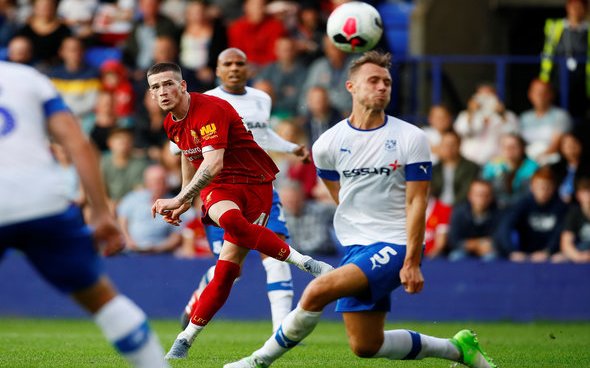 Leeds United are set to sign Liverpool forward Ryan Kent on a permanent basis, according to TeamTalk.

The news outlet claims that Liverpool have reduced their valuation of the 22-year-old and he is now close to joining Leeds in a deal worth £7.5million.

TeamTalk adds that the Whites have been able to fund a move for Kent after selling Kemar Roofe to Anderlecht and are now in “pole position” to strike a deal with the European champions.

It is understood that the Yorkshire side has beaten Derby and Middlesbrough in the race to sign the former Rangers loanee, who won the young Scottish player of the year award in his spell at Ibrox last season.

Kent was in terrific form for Rangers last season and has been a regular feature in Jurgen Klopp’s side throughout Liverpool’s pre-season schedule. It remains to be seen how exactly Kent will replace Roofe because the Reds ace is more of a wide-forward than anything else. However Roofe was also more of a right-sided winger before he was moulded into a striker, so Marcelo Bielsa might have that plan for the former Rangers loanee. It is not a surprise to see Liverpool wanting to cash in on Kent. Although he did well at Ibrox under the wing of Steven Gerrard, he’s nowhere near the level of the current players in his position at Anfield. And at the age of 22, it does not make sense to keep on loaning him out and effectively winding down his contract. £7.5million is not much, but it is not a terrible fee for someone who would not have been involved this season.