Jurgen Klopp is predicted to make three changes to Liverpool’s starting line-up ahead of their UEFA Super Cup showdown against Chelsea in Istanbul on Wednesday night.

Alisson Becker will not be able to start after he was forced out of the action against Norwich last week meaning that Adrian, the Reds’ only other senior goalkeeper, is very likely to start in goals to earn his full debut.

Klopp could also make two more changes to slightly rotate his side.

Joel Matip may replace Joe Gomez in the centre of the defence while Sadio Mane, who started on the bench for the 4-1 win over Norwich, could come in to replace 24-year-old Divock Origi in the three-man attack. 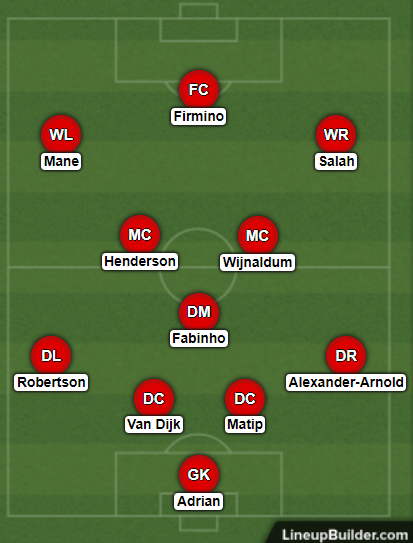 Ahead of Adrian, Trent Alexander-Arnold, Matip, Virgil van Dijk and Andrew Robertson could be picked to make up Liverpool’s back-line.

Klopp is predicted to stick with Fabinho, Georginio Wijnalum and club captain Jordan Henderson as his three central midfielders although there could be a case made for Naby Keita to return to the starting line-up.

Mohamed Salah, Mane and Roberto Firmino are all likely to start as they are Liverpool’s best options up front and Klopp will no doubt want to name the strongest attack possible to take on Frank Lampard’s Chelsea, who will no doubt be sore after their 4-0 defeat to Manchester United on Sunday.

Except for the injured Alisson, this line-up is the same as the one that won the Champions League final against Tottenham at the start of June but it remains to be seen how seriously Klopp will take this competition as Liverpool return to Premier League action against Southampton on Saturday.

Liverpool have won the UEFA Super Cup on three occasions in the past while Chelsea will be looking for their second victory in the competition as Bestikas’ Vodafone Park stadium.