The big game of the weekend plays out at Anfield on Saturday when Arsenal will be hoping to stretch an uncharacteristically leaky Liverpool defence.

It’s a battle of possible the best front threes in the Premier League, with Roberto Firmino, Sadio Mane and Mohamed Salah likely to go up against Pierre-Emerick Aubameyang, Alexandre Lacazette and Nicolas Pepe.

That means the Liverpool defence will need to be tighter than they’ve been in pre-season or in the first two games of the season, with Klopp’s men still looking for their first clean sheet of the campaign.

One of his big decisions will be over Joe Gomez. The 22-year-old played in the centre in the 4-1 win against Norwich but was dropped to the bench for the win against Southampton with Joel Matip preferred.

We think Matip will get the nod alongside Virgil van Dijk on Saturday. Matip outperformed van Dijk against Southampton and the pair look comfortable together.

Gomez might play out on the right with questions still over the defensive qualities of Trent Alexander-Arnold. However, we want to see TAA play against Arsenal. He offers so much more going forward and Liverpool will need to score goals against Arsenal.

Klopp rested Fabinho and Jordan Henderson against Southampton and both should start against Arsenal with Georginio Wijnaldum. Wijnaldum has been far from his best this season but he’s a vital part of the Klopp midfield.

It’s easy for Klopp up top and the Power Three will have more than enough for an Arsenal side who are struggling at the back themselves.

This is the best Liverpool line-up Klopp can put out on Saturday evening and we think Arsenal are set to get taken down a peg or two: 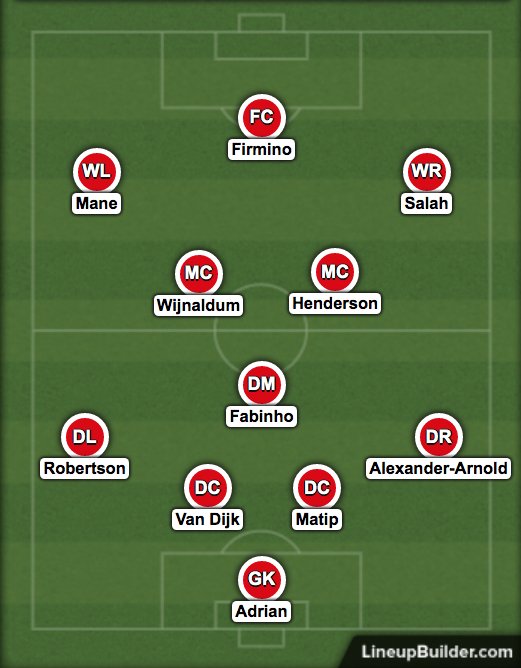