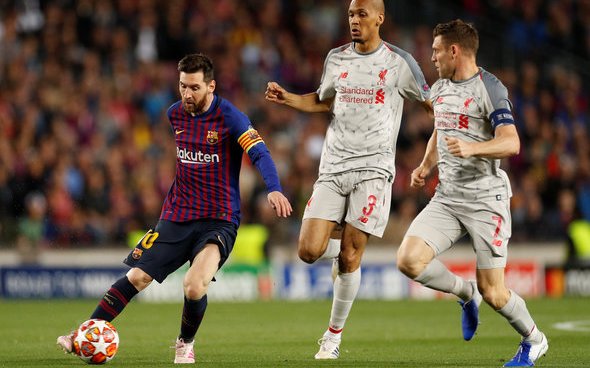 The Athletic journalist James Pearce has rubbished rumours linking Real Madrid with a move for Liverpool midfielder Fabinho this week.

Colombian journalist Jose Luis Vergara reported on his personal Twitter account, on which he has upwards of 45,000 followers, that the Brazilian was set to move to the Spanish giants once the Reds had found a replacement.

Reliable Liverpool journalist Pearce rubbished the report on his personal Twitter account by simply replying to a fan saying it was absolute nonsense.

Fabinho became an integral part of Jurgen Klopp’s plans at Anfield last season after failing to make much of an impact at the beginning of the Premier League season after moving from Monaco in the summer.

In no world would Liverpool sanction a move for Fabinho to leave the club now or in the near future after his incredible end to last season. The Brazilian played a pivotal role in the Reds’ Champions League success against both Barcelona and Tottenham in the final two rounds of the competition. The 25-year-old anchored Liverpool’s defence perfectly, and his great blend of dynamic running and physicality on and off the ball was the perfect recipe for success. Fabinho averaged 2.1 tackles in each game in the Premier League last season, whilst also being a great outlet in possession, averaging 57.5 passes at a success rate of 85.3% [Source: WhoScored]. Despite not hitting the ground running at first, there is no questioning the fact that if Fabinho was to leave, Liverpool would be much weaker in midfield and defence as a result. Zinedine Zidane’s side has somewhat struggled in recent years, and have endured a torrid pre-season in their standards – with Liverpool surely the better place to be right now, after all, they are the European Champions.