Liverpool in four-team battle for Ruiz

Liverpool are in a four-team tug of war with Europe’s elite for Napoli midfielder Fabian Ruiz, according to Calcio Mercato.

The Italian outlet claims that the Reds are interested in signing the Spaniard, as are La Liga heavyweights Real Madrid and Barcelona, and German champions Bayern Munich.

The 23-year-old is under contract with Carlo Ancelotti’s side until 2023, and is considered to be an essential part of the project at the San Paolo.

He was a regular performer across all competitions for the Partenopei last time out, and Ancelotti wants him to remain in place to help try and challenge Juventus’ Serie A hegemony.

With all these teams in the hunt for Ruiz you’d have to assume that any fee involved in a transaction for the Napoli man would surely be an astronomical one. He’s certainly going to cost a hefty amount, and so the question from a Liverpool point of view is is he worth the cash? When you compare what he did last season to the performances of the Reds’ central midfielders – excepting the purely defensive-minded Fabinho – you’d have to consider it a personal judgement call. The statistics give us a bit of an idea, though. As per WhoScored.com, Ruiz beat out the Liverpool trio in average shots per game last time out, while he scored and assisted the joint most of any of them (along with James Milner). He also claimed the most Man of the Match awards with two. The most revealing thing was, though, that the youngster had the highest average WhoScored rating per game (7.25) than any of the quartet. Milner registered 6.91, Jordan Henderson 6.67 and Georginio Wijnaldum 6.89. So he could well be an upgrade for the Reds, but it’s whether Jurgen Klopp considers him enough of one to splash the cash on him. 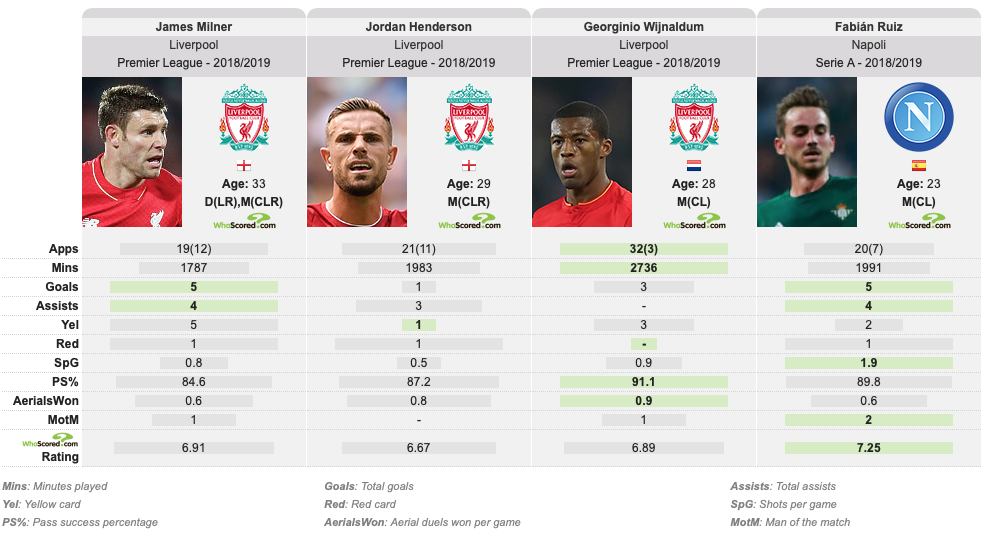