There would have been a time not too long ago that Liverpool fans would have been beside themselves to hear that their club were interested in World Cup winning German forward Thomas Muller, but now, with the 30-year-old’s best days well and truly behind him, Kopites don’t seem too sure about how they would react to snapping him up. Their indecision has been sparked by a report from Christian Falk that Bayern Munich could let Muller leave for the Premier League in the future, and that Liverpool were interested in signing him back in 2017. Nothing ever came of that, obviously, but while there are some fans who still believe that were the Reds to reignite their interest they would be getting a top player, there are others who are less sure. Certainly, you can understand that latter perspective. So far this season, Muller has yet to score in seven appearances in the Bundesliga, and has averaged just 1.1 key pass per hame and a pass success rate of just over 75%, as per Whoscored. That’s really not that great for a player of his ability. After all, there must be a reason why Bayern are wanting rid of him. Chances are, he won’t end up at Anfield, but even if he were to, it may not be the best thing in the world given his recent form.

Live4Liverpool have gathered some of the best tweets below:

He’s been so poor for Bayern over the last 3 seasons why would anyone go for him?

Would've loved him at Liverpool, but he has regressed to an unthinkable extent.

Id have Muller at Liverpool for 18 months happily, one of my favourite non LFC players. https://t.co/KQtPL11tkW

Thomas Muller was finished in 2012 and I’m seeing some Liverpool fans saying they would have him. Crazy how dumb half our fan base is, while the other half is spot on all the time

Muller wants to leave Bayern? This is a false 9 I wouldnt mind seeing at Liverpool

Would have been a time I'd have given anything for Muller at Liverpool. Now, meh. Shows how good we are, I think! https://t.co/mOrlfIAxvD 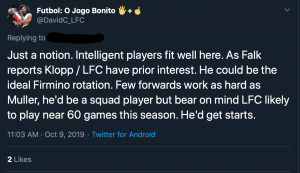