Alisson Becker and Joel Matip are predicted to return from injury for Liverpool and feature in Jurgen Klopp’s starting line-up against Manchester United at Old Trafford on Sunday.

Jordan Henderson is also expected to start for the Reds after the England midfielder was dropped to the bench for the 2-1 win against Leicester in the last match before the international break.

Returns for Alisson, Matip and Henderson are likely to mean that the senior trio of Adrian, Dejan Lovren and James Milner are also facing the axe and could be reduced to the bench for the trip to Old Trafford. 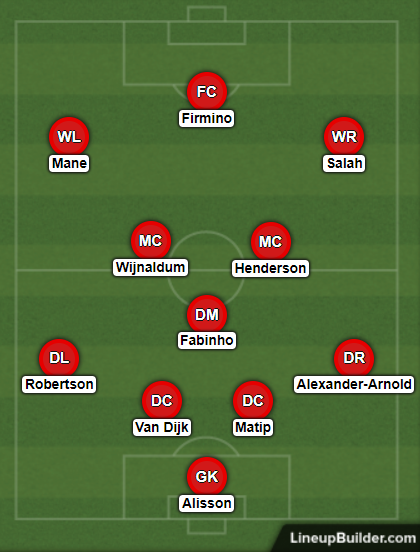 Alisson has been out injured since he was forced off the field in the win against Norwich on the opening day of the Premier League season.

However he has trained with the first-team this week and is expected to start in goals against Manchester United.

Matip is predicted to start at centre-back alongside Virgil van Dijk as the Cameroon international has confirmed that he is now in contention to play against United after missing the last two matches with a knock.

Trent Alexander-Arnold and Andrew Robertson have both returned from their respective duties with England and Scotland unscathed and are both expected to start in the two full-back roles.

In the midfield, Fabinho and Georginio Wijnaldum have been ever-presents for Liverpool this season and are expected to keep hold of their spots alongside club captain Henderson, who is likely to return to the side in place of Milner.

Mohamed Salah picked up a knock in the win against Leicester but there is a good chance that he will shake that off to start in a three-man attack consisting of him, Sadio Mane and Roberto Firmino.