Liverpool manager Jurgen Klopp would be wise to ruthlessly drop centre back Dejan Lovren for Sunday’s trip to Manchester United.

The 57-cap Croatian international put in a pretty strong performance against Leicester City last time out, but that shouldn’t save him on Sunday.

Instead, he should be replaced by Joe Gomez, whose pace will be important up against Marcus Rashford and potentially Anthony Martial, too. Meanwhile, Adrian must drop out in goal for the returning Alisson.

Those should be the only two changes the German makes for this contest, with the Reds appearing in position to destroy Ole Gunnar Solskjaer’s hapless side.

As mentioned, it’s one in one out between the sticks. Alisson has been training well and should be in line to make his first appearance since the opening day of the season.

Meanwhile, it’s business as usual in the full back positions. Trent Alexander-Arnold will be fully fresh on the right hand side of the defence after being snubbed for both England games over the international break, while Andrew Robertson must continue at left back.

Yes, Lovren needs to drop out. He did well against Leicester and Jamie Vardy, but Klopp should go with the younger, fresher, quicker man in Gomez, even if Joel Matip is back to full fitness. As ever, Virgil van Dijk absolutely has to start alongside the England international.

In central midfield, no changes are required. While Klopp usually goes for captain Jordan Henderson in the big games, James Milner has done enough recently to keep his place. He should start alongside Fabinho and Georginio Wijnaldum.

There are no prizes for guessing who must start up front for the Reds. Yes, it’s the deadly duo of Mohamed Salah, Roberto Firmino and Sadio Mane who must play at Old Trafford. 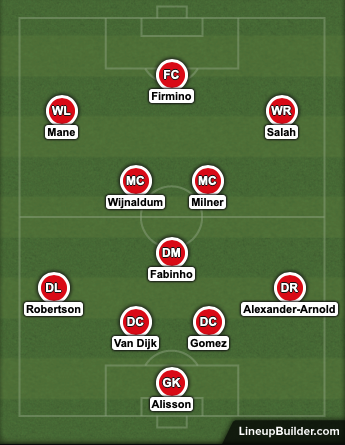