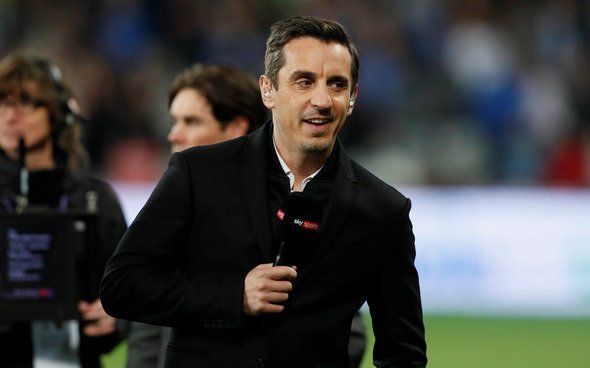 Gary Neville has slammed Virgil van Dijk for his poor clearance that led to Manchester City scoring against Liverpool on Sunday.

Liverpool may have won 3-1 but their wait for a clean sheet at Anfield in the Premier League this season will continue as Bernardo Silva struck the ball past goalkeeper Alisson Becker in the second-half.

Neville believes that van Dijk’s headed clearance in the build-up to Bernardo’s goal should have been a lot better than it was.

“It comes to Bernardo and he finely finishes. It wasn’t the best header from van Dijk, he should have got more height and distance,” said Neville on Sky Sports Premier League on Sunday [06:07pm].

“City put enough crosses in and there’s the deflection of Lovren.

“It’s a lovely little finish at the near post from Bernardo Silva.”

Van Dijk had a very solid performance for Liverpool but Neville is right to criticise him for his role in Man City’s goal. It was a bit sloppy by the former Southampton defender and he should have done a much better job of clearing his lines when he had the chance because City’s attack could have been repelled. Liverpool are struggling to keep clean sheets in front of the home support at Anfield but as long as they’re winning, it does not matter too much. Liverpool’s defence has hardly been at full-strength all season too. Alisson was sidelined for a couple of months and Joel Matip is now out of action with Dejan Lovren filling in alongside van Dijk. None of them really had bad games but it was just one moment of slopiness that was capitalised upon by one of the best attacking forces in world football that is outside of Merseyside.