Jurgen Klopp should make four changes to his Liverpool side if he wants to name his best possible starting line-up to take on Manchester City at Anfield on Sunday.

It is a huge fixture this weekend and one where Klopp will need to name his best and most in-form players if he wants to earn a win that could open up a nine-point gap between his side and Pep Guardiola’s.

James Milner, Naby Keita, Divock Origi and Georginio Wijnaldum should all be axed from the side that lined up in the 2-1 win against Genk on Tuesday night with Andrew Roberson, Jordan Henderson, Sadio Mane and Roberto Firmino all returning. 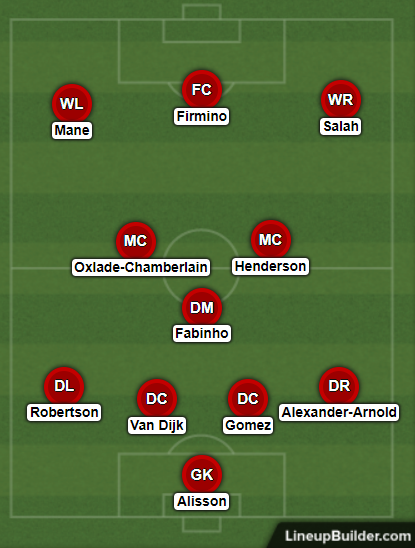 Alisson should start in goals behind a back-four of Trent Alexander-Arnold, Joe Gomez, Virgil van Dijk and Robertson.

Gomez has been rarely-used by Klopp in the Premier League this season with the defender’s last league start coming against Norwich on the opening day of the season.

However the ex-Charlton player is a better bet in the defence than Dejan Lovren is at the moment with Joel Matip injured and the Croatia international not exactly impressing with his form.

In the midfield, Fabinho, Henderson and Alex Oxlade-Chamberlain should start as a three.

Oxlade-Chamberlain has been in superb form lately with goals against Arsenal and Genk in his last few appearances.

Someone like him could add a far bigger attacking threat to Man City than Wijnaldum as Guardiola’s defence has been frail this season.

It would not make any sense for Liverpool’s attack force to be any different than usual with Mohamed Salah on the right, Mane on the left and Firmino in the centre-forward role.