Jurgen Klopp is predicted to make five changes to Liverpool’s starting line-up ahead of their Premier League showdown against Manchester City at Anfield on Sunday.

Joe Gomez, James Milner, Naby Keita, Divock Origi and Alex Oxlade-Chamberlain are all likely to be dropped by Klopp so that he can name a team that has been more familiar to fans in the Premier League.

It means that Dejan Lovren, Andrew Robertson, Jordan Henderson, Sadio Mane and Roberto Firmino could all return to the starting line-up as the Reds prepare for their biggest match of the season yet when Pep Guardiola’s side travels to Merseyside. 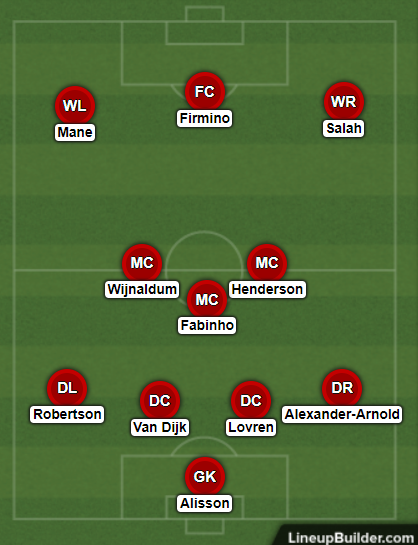 Alisson Becker is expected to start in goals behind a back-four of Trent Alexander-Arnold, Lovren, Virgil van Dijk and Robertson.

Lovren, 30, has been on the fringes of Liverpool’s squad this season but is predicted to earn just his fourth Premier League appearance of the campaign due to Joel Matip’s injury and Klopp’s reluctance to use Gomez in anything other than cup competitions.

Fabinho is likely to start in the defensive midfield role with Georginio Wijnaldum and club captain Henderson occupying the more central positions.

In the attack, Liverpool are expected to line up with Mohamed Salah on the right, Mane on the left and Firmino through the middle as the Merseyside club aim to beat Man City and build an even bigger gap at the top of the table.