Liverpool manager Jurgen Klopp is likely to make two changes for his team’s tricky-looking visit to Selhurst Park to take on Crystal Palace on Saturday.

Left back Andrew Robertson and attacker Mohamed Salah are both expected to miss out, having failed to recover from ankle injuries over the international break.

Those will most probably be the only two changes the Reds make from their crucial 3-1 victory over title rivals Manchester City at Anfield.

Goalkeeper Alisson has provided a hugely reassuring presence between the sticks since his return from injury, and he will almost definitely start once again here.

Meanwhile, Trent Alexander-Arnold has nailed down the right back spot, and there’s next to no chance that he’ll be rested on Saturday. As mentioned earlier, Milner will likely come in for Robertson on the opposite side of the defence.

Polarising centre half Dejan Lovren has seemingly done enough to snatch the starting role with Joel Matip out injured recently. The Croatian can surely expect to start alongside Virgil van Dijk against the Eagles.

In central midfield, Fabinho will surely start in the holding midfield role as usual. Alongside him will likely be the consistent duo of Jordan Henderson and Georginio Wijnaldum.

Further forward, Origi will almost certainly release the crocked Salah, as mentioned. Then there’s Roberto Firmino and Sadio Mane, who will likely start as normal in attack. 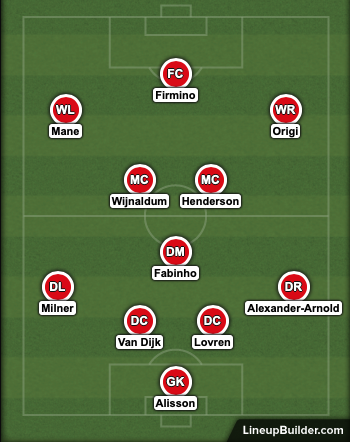