Liverpool return to Carabao Cup action in bizarre fashion on Tuesday evening, with Jurgen Klopp expected to throw the kids out against Aston Villa.

The Reds boss has taken his senior squad to Qatar for the Cub World Cup, leaving a skeleton squad of kids ready to step up to the plate against the Villans.

With that said, it will likely be teenagers galore. The German, though he won’t even be there, is expected to make a full 11 changes from the team that beat Watford 2-0 on Saturday.

It will be interesting to see how the Reds do in this one, and how Villa approach a game against what amounts to an academy side. It should be fascinating viewing.

The easiest selection decision for Liverpool Under-23s boss Neil Critchley, who will be taking charge of this one, is between the sticks. Caoimhin Kelleher is almost certain to get the nod in goal.

Right back looks set to be a similarly easy choice. Ki-Jana Hoever is a quality operator and will surely get another first team chance here. Meanwhile, Yasser Larouci will likely start on the opposite side of the defence, with Adam Lewis struggling with a slight injury.

Sepp van den Berg appears to be a sure-fire starter at the heart of the defence, and looks set to be joined by Morgan Boyes. Whether they’ll be enough to keep Villa out remains to be seen.

Curtis Jones heading to the Club World Cup opens up an extra slot in central midfield, and so Herbie Kane, Pedro Chirivella and Isaac Christie-Davies will likely start in the middle of the park.

And in the front three, viewers can expect to see Harvey Elliott, Luis Longstaff and Rhian Brewster lining up in a front three bursting with potential. 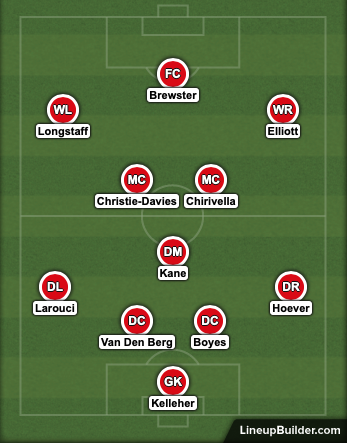