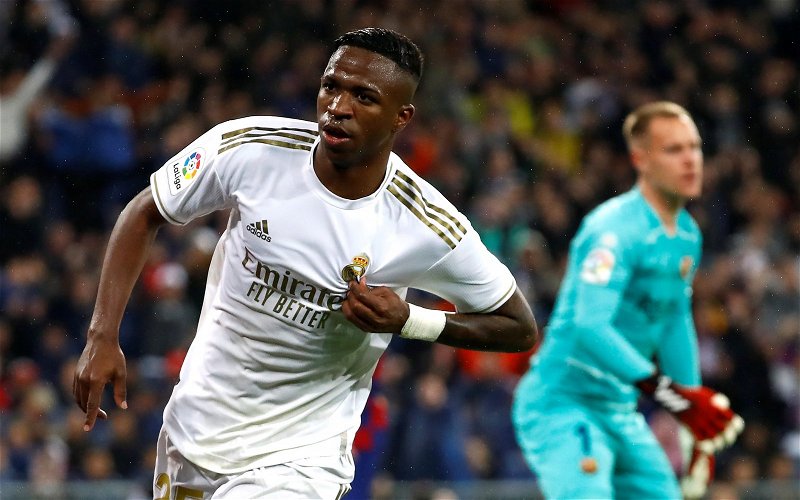 Liverpool manager Jurgen Klopp has identified Real Madrid youngster Vinicius as a primary target for this summer’s transfer window, according to reports from Spain.

Diario Madridista claimed [via Daily Express] that the Reds boss has the 19-year-old winger in his sights, having fallen short in his attempts to sign the Brazilian last year. Klopp is keen to strengthen his attacking options in the summer, with both Mohamed Salah and Sadio Mane likely to miss a large chunk of next season due to the Africa Cup of Nations.

However, according to Diario Madridista, Vinicius isn’t keen to leave Real Madrid, nor are the La Liga club seeking to part ways with the teenager.

The left winger doesn’t turn 20 until July but has already made 59 appearances for Real Madrid’s first team, with 108 senior games in total during his embryonic career. Indeed, he was only 16 when he was signed from Flamengo for a fee of £39.6m (as per The Guardian) just over a year before he made the move from Brazil to Spain upon his 18th birthday.

He has featured in 28 matches for Zinedine Zidane’s team this season, albeit mostly as a substitute, with four goals and three assists to his name from 1,363 minutes of game-time (as per TransferMarkt). That works out at a goal every 340.75 minutes and one assist per 454.33 minutes. He has averaged 1.6 shots and 0.8 key passes per game in La Liga, with a passing success rate of 80.1% (as per WhoScored).

He showed his ability to come good on the big occasion earlier this month when opening the scoring in Real Madrid’s 2-0 win over Barcelona in El Clasico, his deflected strike carrying enough power for him to finish from a tight angle. [via BBC]

It was only three months ago that Klopp signed a left winger when he brought Takumi Minamino to Merseyside from Red Bull Salzburg, although the Japan international has been given little opportunity so far to prove his worth. His only starts for the club have come in the FA Cup, with his Premier League involvement limited to 77 minutes across three substitute appearances in 10 league games since his arrival (as per TransferMarkt).

The 25-year-old may have struggled for game-time at Liverpool so far but he proved during his time in Austria that he can be a potent attacking threat, with nine goals and 11 assists in 23 games for Red Bull Salzburg this season prior to his winter move. Those figures have come in 1,927 minutes of game-time, with averages of one goal every 214.11 minutes and one assist per 175.18 minutes – substantially better than those posted by Vinicius.

While there may be a temptation to dismiss Minamino’s tallies due to his involvement in Austria’s top flight compared to La Liga, it is worth noting that he struck two goals and set up another three in the Champions League for Red Bull Salzburg, demonstrating that he can be effective at the highest level of European football. In that competition, he has averaged 2.8 shots and two key passes per game, as well as having an 84% passing success rate (as per WhoScored).

Another plus point for the Japanese native is his ability to play not just on the left wing but anywhere across the forward line or in the ‘number 10’ role. Vinicius, by contrast, has been used almost entirely on the left flank at Real Madrid this season.

If the Premier League season resumes and Liverpool wrap up the title with a few games to spare, Minamino could make a few starts ahead of first choice left winger Mane. Should that transpire and if he impresses, there may seem little need to bring in Vinicius. Either way, Minamino deserves a fair chance to prove his worth rather than Klopp splashing out on a player with inferior goal involvement averages to the Japanese winger.

Liverpool fans, would you rather see Minamino being given opportunities instead of spending money on Vinicius? Comment below with your views!