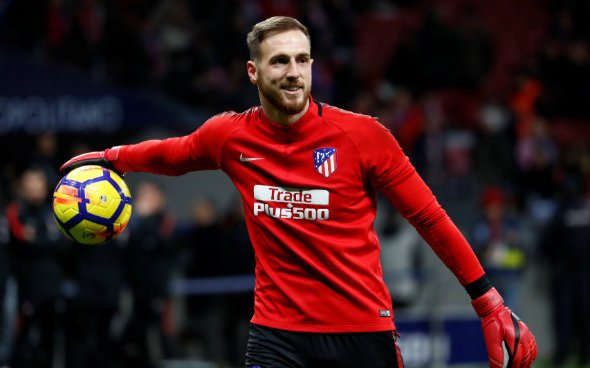 The 27-year-old made no fewer than nine saves for the visitors as they won 3-2 after extra time to advance to the quarter-finals, his imperious display contrasting with that of opposite number Adrian, whose error led to Atletico’s first goal and altered the course of the tie.

Some noteworthy saves pulled off by the Slovenian included a stop to thwart Roberto Firmino early in the second half and a fine save to keep out Georginio Wijnaldum just before Firmino put Liverpool 2-0 ahead early in extra time (as per Sky Sports). BBC reporter Phil McNulty named the the Atletico ‘keeper as his man of the match, citing his “colossal presence in the penalty area” as he “claimed countless crosses”.

On a night when Atletico faced 34 shots but Oblak was beaten only twice, these Liverpool fans on Twitter commended the performance of the visitors’ goalkeeper at Anfield, with one Kopite saying that he “taught everyone a lesson” last night:

What a crazy game. Best Liverpool performance in months, but wasn’t enough. Oblak is a monster, Alisson was missed badly and the likelihood we’d make 3 finals in a row was always unlikely. Infinitely proud of our European run the last 3 seasons. Back at it Monday! #YNWA #LFC

Even as an @LFC fan, I disagree & disagree strongly. Defending is an art & its very much Football. You defend from front they with 2 lines of 4. Proper Football.
And yes goalkeeping is an art as well, that very few care about. Oblak taught everyone a lesson or two. #LIVATL https://t.co/WBoOFRd7BO

Sad day for us ? but fair play to atletico you guys were so clinical & effective on your chances. And I want respect Mr. Jan Oblak for his outstanding performance

All about the goalkeepers…they had a world class keeper in Oblak keeping us out.

We didn't have our World Class keeper to keep them out.

Oblak is so, so good.

Stopped it from being a humiliation.

It wasn't a defensive masterclass or a Diego Simeone masters it was a Oblak matersclass. #LIVATL

Do you think Oblak’s display was one of the main reasons for Liverpool’s Champions League exit? Comment below with your views!