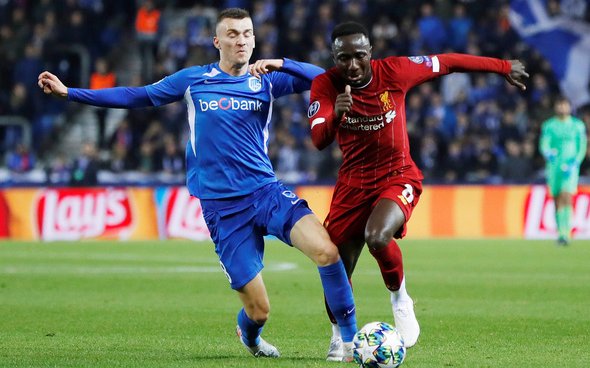 In the last half an hour, Liverpool have named their starting XI and substitutes for tonight’s Champions League clash against Atletico Madrid – but plenty of Reds fans have honed in on one man who isn’t among the 18 players in Jurgen Klopp’s matchday squad.

As per the team selection outlined by @LFC on Twitter, Naby Keita is omitted completely from the squad as Jordan Henderson returns from injury to take his place among the midfield trio while Fabinho drops down to the substitutes’ bench (as per liverpoolfc.com)

Our side to face @atleti ?

Keita was an unused substitute in Saturday’s win over Bournemouth, having not been considered for the previous game against Chelsea due to a minor hip problem. That was the latest in a succession of injuries that the Guinean has suffered in his time at Liverpool and he has been restricted to just 18 appearances in all competitions this season, having started just three of the Reds’ previous seven Champions League games in the current campaign.

These Liverpool fans weren’t too impressed to hear of Keita’s omission from the squad tonight:

Keita actually needs to be sold

Keita not even on the bench? This is getting pathetic now man https://t.co/Xn4z9TumjC

Keita really finito here, I was hoping he'd be the difference maker today. Not even on the bench.

Keita needs to go in the summer, it’s a joke that he is never fit?

Naby Keita not even on the bench! Either another knock or Klopp doesn’t fancy him – both pretty damning https://t.co/rnb0DzztOq

I’m actually worried. This is a lose lose situation. If he’s injured then he’s probably going to be sold, if he’s not injured then that mran Klopp doesn’t trust him/ rate him. Keita FC really is coming to an end.

What do you make of Keita being left out of the Liverpool squad for tonight’s game? Comment below with your views!