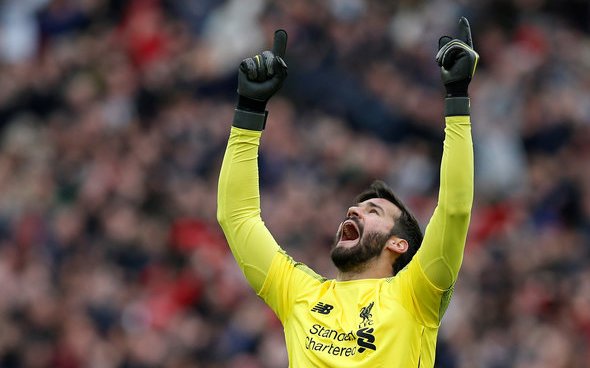 Former England international Danny Mills has advised Liverpool to secure a new deal for Alisson as quickly as possible, describing the Brazilian as “calmness personified”.

With Jurgen Klopp keen to tie down midfielder Georginio Wijnaldum to a new contract (Football Insider) and Virgil van Dijk reported to be offered an improved deal worth more than £50m (Football Insider), the ex-Manchester City defender believes that the Anfield club should also reward their first choice goalkeeper with improved terms, even though his current contract runs to 2024.

Speaking about Alisson to Football Insider, Mills said: “It is very important Liverpool tie him down to a new deal. He is calmness personified. He is exceptional at what he does and gives everyone that assurance with that air of confidence that he has. We have seen goalkeepers go on to their late thirties and there is no reason that he is not of that ilk. Alisson keeps himself fit, as players do in this day and age, so there is every chance he could have a very long career.”

Mills makes some valid points about the Brazilian goalkeeper, who is still only 27 and therefore could easily play at a high level for at least another decade. Gianluigi Buffon continues to feature occasionally for Serie A champions Juventus at the age of 42, for example.

The ex-England defender’s claim about Alisson being “calmness personified” is understandable, too – the Brazilian demonstrated extreme coolness early in his Liverpool career when he casually chipped the ball over Brighton’s Anthony Knockaert in a 1-0 win at Anfield in August 2018, while an article from Rousing The Kop pointed out how he often catches the ball with ease to relieve pressure on his defenders rather than electing to punch it and potentially offer further chances to opponents.

For a clear sign of how important the 27-year-old is to Liverpool, you need only look at the figures he has posted since joining from Roma for £67m two years ago (as per Sky Sports). He kept the most clean sheets (21) out of anyone in the Premier League last term, helping the Reds to earn the division’s best defensive record of 22, just under half of their concession tally from 2016/17 and less than half of their tallies from the three preceding seasons.

He has racked up another 10 clean sheets in the league this season, the joint-second highest figure behind Nick Pope on 11, and that is despite missing nine matches through either injury or suspension. In 2,485 minutes on the pitch in all competitions, he has let in only 17 goals, one per 146.18 minutes. Adrian, who has deputised in his absence and made costly errors against Chelsea and Atletico Madrid this month, has been beaten 24 times in 1,563 minutes, conceding one goal every 65.12 minutes.

As Mills has stated, Alisson has been a calming presence as Liverpool’s last line of defence and would be wholly deserving of improved terms as a reward for his consistently high standard of performances.

Liverpool fans, do you agree with Mills’ recommendation of an improved Anfield deal for Alisson? Comment below with your views!