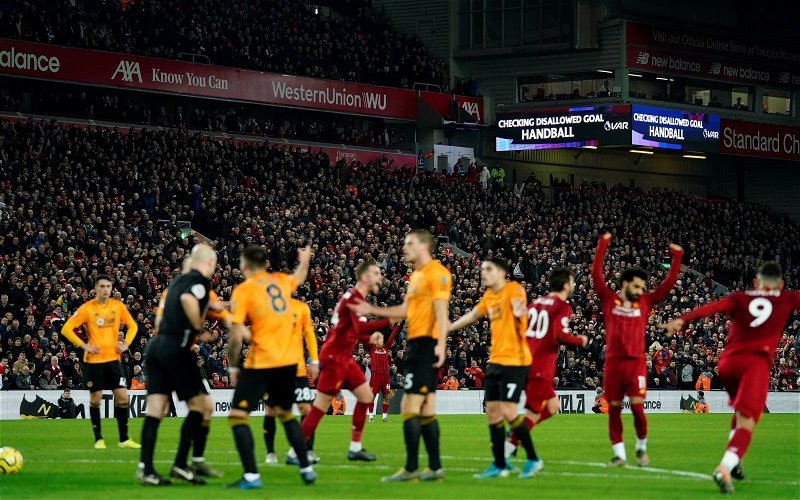 ESPN have produced an alternative Premier League table showing where each team would stand and how many points they would have if VAR hadn’t been introduced this season, with the conclusion that Liverpool would still have an emphatic lead even without the technology.

ESPN’s findings showed that, if VAR was not in place to alter goal decisions for or against, the Reds would only be two points worse off than their current haul of 82 and would still have an 18-point advantage on Manchester City, who would have five more points were it not for the use of VAR.

As noted by ESPN, their analysis uses an algorithm from a research team led by Thomas Curran at the London School of Economics and accounts not only for the simple alteration of goal decisions but also the state of the game at the time of each VAR intervention as well as “a team’s form, performance and relative strength”.

Liverpool have ultimately benefitted slightly from the accumulation of VAR decisions over the course of the season and some rival supporters have disparagingly referred to the club as ‘LiVARpool’ following games where key decisions went in the Reds’ favour.

Perhaps the most blatant of these was the incredibly harsh offside call on Pedro Neto in Wolves’ 1-0 defeat at Anfield in December, when the winger thought he had equalised on the stroke of half-time. The Merseysiders also end up being grateful for VAR-disallowed goals by Cesar Azpilicueta and James Tomkins in 2-1 away wins over Chelsea and Crystal Palace respectively.

However, there have been several instances where VAR has counted against Liverpool this season. In the 1-1 draw at Manchester United in October, Sadio Mane had a goal harshly disallowed for handball not long after Divock Origi seemed to be fouled in the build-up to Marcus Rashford’s opener. In the reverse fixture at Anfield, Roberto Firmino had a goal chalked off for a foul on David de Gea, although that decision was justifiable. Against Watford in December, Mane thought he had scored on 51 minutes, only to be denied by a ridiculous offside call.

Indeed, while Jurgen Klopp’s side have gained a net total of two points from VAR decisions this season, they are by no means the biggest beneficiaries of the technology – both Brighton and Manchester United would have five points fewer were it not for VAR interventions.

If Liverpool were leading the Premier League table by a single-figure points margin, then there may be justifiable qualms about them getting a huge helping hand from VAR. However, that their adjusted lead is still a mammoth 18 points (instead of the 25-point advantage they actually possess) reflects just how far ahead of every other team they have been throughout the season. Also, as pointed out by ESPN, the algorithm in use accounts for circumstantial probability of outcome, so any hypothetical arguments that the Reds would crack under pressure or are only coasting to the title because of VAR do not hold water.

Ultimately, decisions will go for and against a team over the course of a 38-match season. There may be a greater disparity in either direction, as ESPN’s alternative table has shown, but when Liverpool are so far clear of the rest of the Premier League and have dropped only five points from 29 games, their status as champions-elect cannot be flatly dismissed as pure luck. VAR may have been a nice fallback on a couple of occasions but, contrary to what some rival fans may think, it has not been the bedrock of the Reds’ title charge this season – and the alternative, VAR-less table from an independent research team proves as such.

Liverpool fans, do you think the VAR-less Premier League table proves once and for all that the Reds deserve better than to be derided as ‘LiVARpool’ by some begrudging observers? Comment below with your views!