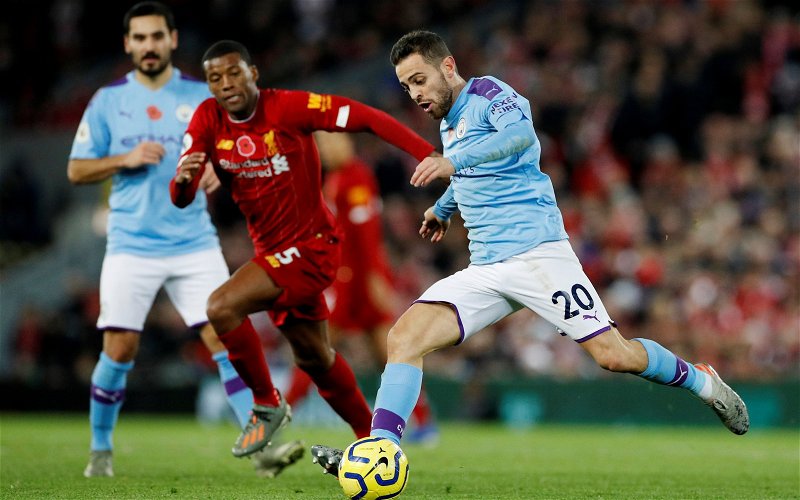 Manchester City winger Bernardo Silva has seemed to suggest that Liverpool receive unfairly preferential treatment when the PFA Player of the Year prize is awarded.

Despite the Premier League title going to the Etihad Stadium in each of the last two seasons, the main individual gong has been given to a Reds player, with Virgil van Dijk taking the prize last year after Mohamed Salah claimed it in 2018.

Speaking to Bleacher Report [via The Mirror], the Portugal winger said: “Three seasons ago we win the league and they were 30 points behind. Kevin De Bruyne, unbelievable season, Mo Salah, scores a lot of goals. He’s a great player and I admire him a lot, and they give the award to Mo Salah.

“The season after, very tight. Raheem Sterling was on the run with van Dijk, they give the award to van Dijk. This season again, Kevin de Bruyne, another unbelievable season. We’re behind, but because Liverpool are champions probably one of them is winning the award again.”

It is understandable that Bernardo would rather see one of his team-mates claim the PFA Player of the Year award instead of someone from Manchester City’s rivals, while he may feel somewhat justified in wondering why Guardiola’s players have been overlooked for individual honours despite winning the Premier League with points tallies of 100 and 98 in the past two seasons. Indeed, as pointed out by The Mirror, no Manchester City player has ever won the PFA Player of the Year in the award’s 47-year history.

However, Bernardo’s comments seem to undermine just how spectacularly Liverpool’s award winners performed in the respective seasons in which they were recognised. Salah came to Anfield in 2017 having previously flopped at Chelsea and he ended his first year at Liverpool with 32 Premier League goals, the highest single-season tally in the division since 1994/95, when the league lasted 42 games rather than the current 38. De Bruyne had a fine haul of eight goals and 16 assists in the division but Salah’s extraordinary impact made him a deserving winner.

Last season, Sterling scored 17 goals in the league and set up another 12 as Manchester City defended their title. However, he was still outscored by both Salah and Sadio Mane at Liverpool (22 goals each), while Van Dijk started every game as the Reds recorded the best defensive record in the league, conceding only 22 goals and recording 21 clean sheets. Considering that Jurgen Klopp’s side had shipped 38 goals the previous season, thus reducing their concession tally by 42.1%, it’s not hard to see why Van Dijk won the award.

Bernardo also seems to overlook the fact that the PFA Young Player of the Year award has gone to a Manchester City man in the last two seasons (Sterling last year, Leroy Sane in 2018), while The Mirror pointed out that half of the PFA Player of the Year recipients in the Premier League era did not win the league in the season in which they were recognised.

The 25-year-old’s discontent is understandable but, given the standards set by Salah and Van Dijk in the last two seasons, it seems harsh to suggest that they weren’t deserving winners of the individual prizes.

Liverpool fans, what did you make of Bernardo’s remarks on the PFA Player of the Year awards? Share your views in the comments section below!