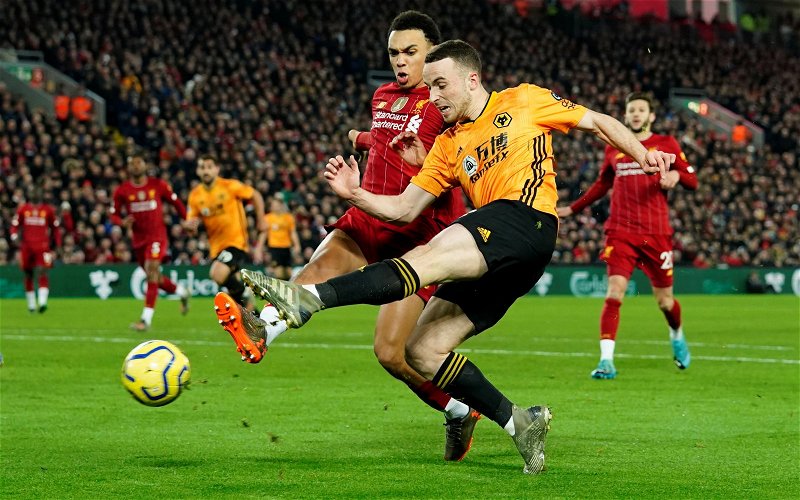 Liverpool Echo journalist Reece Chambers has identified Diogo Jota as a player that Liverpool could seek to bring in to bolster their attacking options.

The writer labelled the Wolves winger as “the next Sadio Mane” and drew comparisons between the Portugal international and the Reds attacker, who joined from Southampton in 2016 after two impressive seasons in the Premier League and helping the Saints to finish sixth, the position which Jota’s Wolves currently occupy.

Jota vs Mane – how do they compare?

Jota hit 10 goals for Wolves last season but has already increased that tally by 50% in the current campaign, scoring 15 times in 2,491 minutes on the pitch (one goal per 166.07 minutes). That is the same number of goals that Mane scored in his final season at Southampton in 2015/16 from 3,116 minutes of game-time, averaging a goal every 207.73 minutes.

Jota has an average of 2.4 shots per game this term, slightly higher than the 2.3 that Mane averaged four years ago at the Saints. The Wolves man also has a marginally better match average for successful dribbles (2.2) in comparison to the Senegal winger’s 2.1 average in 2015/16.

Also, the current Liverpool attacker was 23 years old for most of that season, which is the same as Jota’s current age. Taking those factors into account, if the Reds considered Mane worthy of a £34m transfer then, they could justifiably pursue Jota now.

Changing circumstances for Mane and Liverpool

While the numbers above present Jota in a very favourable light, the development of Mane and Liverpool over the last four years must also be considered. The Senegal forward joined the Reds at a time when they were not spoiled with attacking riches – Daniel Sturridge was their top scorer in 2015/16 with 13 goals – and he came to a club who had finished two places lower than Southampton that season.

The picture has changed significantly since then. Mane has firmly made the left winger role his own at Anfield, with 77 goals for Liverpool and tallies of 13, 20, 26 and 18 in his four seasons at the club. His prolific nature has helped the Reds to evolve from a mid-table outfit at the time of his arrival in 2016 to Champions League winners last year and runaway Premier League leaders this term. While Mane joined a distinctly flawed Liverpool team four years ago, Jota would be coming into an outstanding, trophy-winning one if he were to make the move to Anfield this summer.

That said, the Wolves man would certainly seem like a fine addition to Jurgen Klopp’s squad. He knows the Premier League well from his time at Molineux and he has shown with 15 goals in the division that he can be a potent scorer at this level. Also, with the firm likelihood of Mane missing a chunk of next season if Senegal qualify for the Africa Cup of Nations in January 2021, Jota would be an ideal replacement to call upon. Therefore, Chambers’ endorsement of him as a player worth considering is quite justified.

Liverpool fans, do you think Jota would be an astute addition this summer if the Reds were to make a move for him? Could he emulate Mane if he comes to Anfield? Have your say by commenting below!