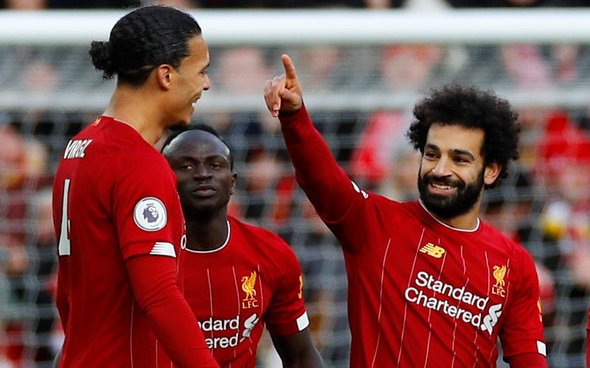 The 2019/20 season may not be completed just yet but, with most of the campaign played and football currently halted due to the global coronavirus pandemic, now seems like a good time to reflect on some of the extraordinary numbers and statistics from Liverpool’s remarkable season to date.

The Premier League leaders had been closing in on a first title since 1990 but have been made to wait for their chance to finally end that exhaustive gap because of English football grinding to a halt. Along the way, Jurgen Klopp’s team have posted some scarcely believable records in what, up to last month, had been a near-relentless stride towards generational glory. Here’s a selection of some of the more intriguing numerical facts to emerge from Liverpool’s 2019/20 season to date:

17 – consecutive Premier League victories that had been racked up, stretching back to last season, after beating Leicester on 5 October [Sky Sports]

7 – consecutive Premier League clean sheets, starting from the 3-0 win at Bournemouth on 7 December to the 2-0 win at home to Manchester United on 19 January before Raul Jimenez’s goal for Wolves on 23 January [TransferMarkt]

7 – matches that it took Liverpool to hit 21 points (maximum possible amount at that time), the same figure that bottom club Norwich have from 29 matches

On two occasions this season, Liverpool were represented in first team fixtures by members of their under-23 squad, with Jurgen Klopp ceding management of those games to then-Academy coach Neil Critchley. The Carabao Cup tie against Aston Villa, which took place while the senior squad were in Qatar for the Club World Cup, and the FA Cup replay against Shrewsbury, which fell during the first team’s designated winter break, saw some remarkable facts and figures emerge as the youngsters got their moment in the limelight and the extraordinary depth of Liverpool’s playing ranks was made clear:

1,210 – sum of shirt numbers from matchday squad in the 1-0 FA Cup replay win over Shrewsbury [TransferMarkt]

46 – Adam Lewis’ shirt number was the lowest of the starting XI, as well as the matchday squad, in the FA Cup replay v Shrewsbury [TransferMarkt]

19.28 – average age (in years) of the starting XI in the FA Cup replay v Shrewsbury – the youngest in the club’s history [BBC]

That was the slogan on Mohamed Salah’s T-shirt on the night that Liverpool retrieved a 3-0 first leg deficit to beat Barcelona 4-0 at Anfield in the Champions League semi-finals last year and it’s a mantra that the Reds have put into practice on multiple occasions this season:

2 – matches lost inside 90 minutes prior to mid-February out of 39 played (Napoli away in the Champions League and Aston Villa in the Carabao Cup) before losing three out of four in the space of 15 days (against Atletico Madrid, Watford and Chelsea) [TransferMarkt]

Liverpool fans, what are your favourite statistics about the Reds from the season so far? Let us know in the comments section below!