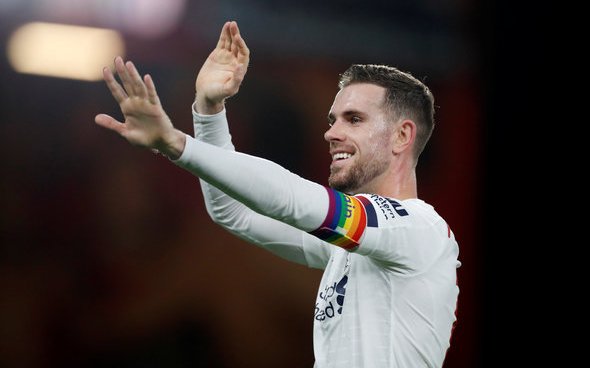 Yesterday we brought you feedback from a number of Liverpool supporters singing the praises of club captain Jordan Henderson for his role in the creation of the new #PlayersTogether initiative and the plaudits for the 29-year-old certainly haven’t stopped there.

Over the last 24-36 hours, several of Henderson’s Premier League playing colleagues have also publicly hailed the Liverpool skipper’s role in helping to set up #PlayersTogether, an initiative from numerous English top-flight players with the mission of generating and donating funds towards NHS staff and patients amid the coronavirus pandemic in the UK.

Matt Lawton and Paul Joyce reported in The Times last week of how the Reds midfielder contacted the captains of other Premier League clubs with a plan to organise a large-scale fund to support frontline health workers in the country. Consequently, these top-flight colleagues of Henderson have gone public in saluting the 29-year-old:

“Jordan took the initiative to pitch the idea to the rest of the lads and it was a no-brainer for us. It shows so much support within the football community to show we are one. We don’t know when that will get up and running, so in the meantime it’s a great chance for players to show how much the NHS means to us – a cause that is close to a lot of players’ hearts.”

“It was not a hard thing at all. Jordan was brilliant in terms of setting up and taking the initiative and moving forward with it and then getting in contact with everybody. As soon as he did, everybody was on board straight away. So it’s a brilliant, brilliant thing that he’s set up and something that’ll affect a lot of people.”

[PA News Agency via This Is Anfield, 9 April]

“Jordan Henderson might be the captain of the European champions but he is also a working-class lad from Sunderland who deserves full credit for bringing us all together, showing what makes a true leader. As a group we just wanted to do something positive, and we feel we have taken a step towards achieving it.

“From the moment Jordan called me, the Premier League captains have worked tirelessly to ensure we could get #PlayersTogether in place in such a short time. There has been great collective urgency to help in any way possible, while at the same time ensuring our funds are directed to the places that are most needed.”

That Henderson has been acclaimed for his role in the establishment of #PlayersTogether by so many of his fellow footballers gives a clear indication of how proactive he was in inspiring his peers to demonstrably show their support for the heroic frontline staff in the NHS during this exceptionally difficult time.

It also serves to further highlight just how misguided Matt Hancock, the UK government’s health secretary, was in singling out Premier League footballers as a target for their perceived lack of support towards the fight against COVID-19. Far from deserving criticism, Henderson and his fellow footballers merit every commendation for playing their part in actively supporting the NHS.

Liverpool fans, do you think it says a lot about Henderson that so many of his fellow Premier League professionals have explicitly praised his role in the foundation of #PlayersTogether? Comment below with your views!