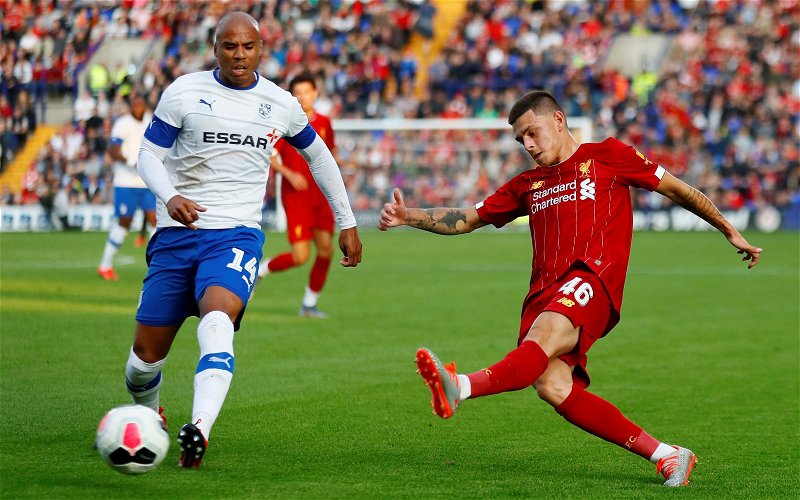 In the latest instalment of our series titled ‘Melwood Watch’ – we have previously featured Joe Hardy and Neco Williams – Live4Liverpool takes a look at some of the players from the Reds’ academy ranks, outlines their story so far and discusses their chances of becoming a fixed first team presence at Anfield.

If there is one position at Liverpool where talented youngsters may feel they have a reasonable chance of emerging from the academy ranks to become a first team squad member, it is probably left-back. Yes, that is the position occupied by one Andrew Robertson but there is no bespoke senior alternative for the Scot in that role. Indeed, midfielder James Milner has been deployed in that position on occasions this season.

However, Jamie Carragher believes that there could soon be genuine left-back cover for Robertson in Jurgen Klopp’s squad. Speaking to the Liverpool Echo, he made a case for several young prospects at the club to break into the first team picture next season and spare the Anfield powerbrokers from the need to invest heavily in the transfer market. One of those mentioned was a 20-year-old left-back by the name of Adam Lewis.

Carragher told the Liverpool Echo: “They have had great exposure and played in big games. They’re not all going to come through, of course not, but two or three could become really good squad players at the very least. Neco Williams, in my eyes, he should already be backup to Trent Alexander-Arnold at right-back.”

He added: “Would you go and buy backup for Trent given the performances Neco Williams has shown? It could be the case at left-back with Adam Lewis or Yasser Larouci. People are talking about the need for a creative midfielder, but Curtis Jones has come through now as well.”

Adam Lewis – The story so far at Liverpool

Primarily a left-back but also capable of playing in midfield, Lewis may be only 20 but he has already been on Liverpool’s books for years, having first come into the club at under-6 level before making his way through the various age groups. He is currently a member of the under-23 squad and he displayed his strengths in getting forward to contribute to attack by providing 13 assists in 42 appearances at under-18 level. He also has experience of playing on the continent from 14 outings in the UEFA Youth League.

He signed a long-term contract with Liverpool in February 2019 and appeared in several of the first team’s pre-season friendlies last summer. He made the bench for the Carabao Cup trip to MK Dons in September but was not called upon and then suffered an unfortunate setback in the form of a knee ligament injury he sustained in an under-23 game against Arsenal.

That was his last appearance at underage level for the Reds, with a long convalescence hampering his involvement, but his next match would be one that the youngster will surely treasure for the rest of his life. Along with other youth team colleagues, he was selected in the starting XI for the FA Cup replay against Shrewsbury in February, thus making his senior debut. He helped the young Reds to keep a clean sheet as they triumphed 1-0 over the League One club, with his contribution that night lauded by his then-manager Neil Critchley.

What does the future hold for Adam Lewis at Liverpool?

A scout report in the Daily Mail highlighted Lewis’ strengths as “a wing-back with genuine enthusiasm” to surge into attacking positions and deliver pinpoint crosses without the need to switch between feet. The report also praised his positional sense and apparent understanding of the importance of combination play with defensive team-mates.

Those traits could serve him well as he seeks a genuine breakthrough at senior level, although his prospects of getting first team minutes at Liverpool could depend on their transfer market activity in the summer. As per Football London, the Reds have been linked with a younger but more experienced left-back in Bukayo Saka, who has featured 33 times for Arsenal’s first team.

Should he, or another left-back with ample senior experience, be signed by the Reds over the summer, Lewis would probably need to be content with another season at under-23 level or possibly a loan move to a Football League club to obtain first team exposure. Even in the underage grades, he faces competition for the left-back slot in Yasser Larouci, who has also sampled senior competitive first team action for Liverpool this season.

However, if no left-back signings are made in the next transfer window, Klopp might draft Lewis into the senior setup as cover for Robertson and present him with sporadic opportunities to impress next season. This summer could be a rather interesting one for the 20-year-old’s prospects at Anfield.

Liverpool fans, can you see Lewis being promoted to the first team squad in the next few months as backup for Robertson? Comment below with your views!