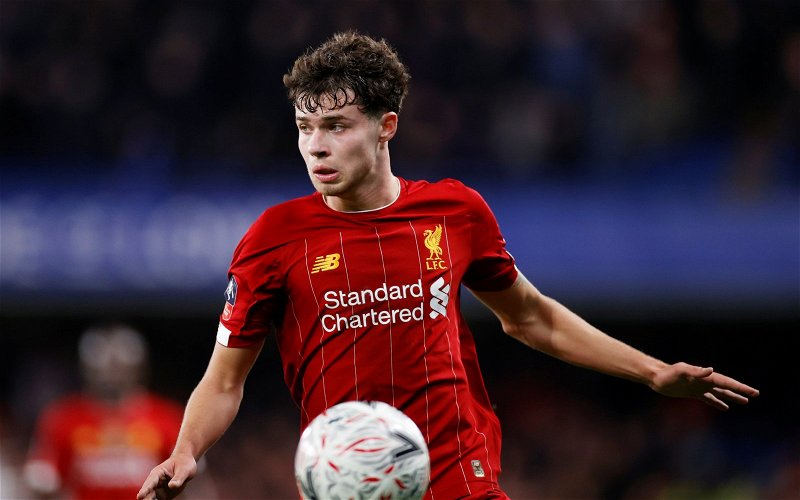 In the second instalment of a new series titled ‘Melwood Watch’ – last week we featured Joe Hardy – Live4Liverpool takes a look at some of the players from the Reds’ academy ranks, outlines their story so far and discusses their chances of becoming a fixed first team presence at Anfield.

The narrative of enterprising teenage right-backs emerging from Liverpool’s academy ranks to make an impression at first team level is beginning to feel like a familiar one. Three-and-a-half years ago, Jurgen Klopp gave a debut to a raw defender named Trent Alexander-Arnold, not long after his 18th birthday, in an EFL Cup clash against Tottenham. As you are more than likely aware, he has gone on to establish himself as a key presence in the Reds’ first team, making 125 appearances (two of which were in Champions League finals) and providing 34 assists, including 14 this season to make him the squad’s market leader in that respect.

Last October, there was a sense of déjà vu as Klopp gave a senior debut to an 18-year-old right-back in the Carabao Cup against north London opposition at Anfield. When Arsenal came to town, Liverpool’s starting line-up featured a new name in Neco Williams and his debut went better than Alexander-Arnold’s. The elder of the two right-backs was booked against Spurs; the younger version set up Divock Origi’s stoppage time equaliser against the Gunners.

With Williams turning 19 yesterday, let’s look at his Liverpool story to date and what lays in store for him at Anfield.

Neco Williams – the story so far at Liverpool

As mentioned above, the Welsh teenager made an instant impression on his senior Liverpool debut with that assist for Origi and it wasn’t the only plus point about his performance that night – as per WhoScored, he completed four successful dribbles and won four tackles (the most of any Reds player) against Arsenal.

Having returned to the Reds’ underage ranks and racked up two more assists in a 7-0 UEFA Youth League thrashing of Napoli, he was included in the senior squad for the triumphant Club World Cup trip to Qatar in December and started against Everton in the FA Cup just after the New Year. He kept his place in the side for the next round of the competition against Shrewsbury and his cross forced an own goal from Donald Love in the 2-2 draw away to the League One side.

Williams was again in the team for the replay against the Shrews and again claimed an assist as his diagonal ball from deep was headed by Ro-Shaun Williams into his own net for the game’s only goal. A fourth successive FA Cup start against Chelsea did not go quite as well as the Reds lost 2-0 at Stamford Bridge, although his performance on the night drew praise from many Liverpool fans.

Although he is awaiting a Premier League debut, he has made the bench seven times this season, so he is firmly in Klopp’s plans. Indeed, his tally of three assists from five games is an early sign that he could be just as effective an attacking right-back outlet as Alexander-Arnold, while he has the best assists-per-minutes tally of any player at Liverpool this season, setting up one goal for every 150 minutes played.

What does the future hold for Neco Williams at Liverpool?

Aside from Williams, Nathaniel Clyne is the only other natural right-back alternative to Alexander-Arnold at Liverpool and the ex-Southampton man has been out of action all season due to a cruciate ligament injury in July. Also, the 29-year-old has been linked with a possible exit in the summer, with Turkish media outlet Posta claiming [via Sport Witness] that Besiktas are hoping to sign him.

If that transaction occurs, it should open the door for the Welsh teenager to firmly become Alexander-Arnold’s main understudy in Klopp’s first team squad. He recently received the backing of Evening Standard journalist David Lynch, who told Anfield Watch: “Klopp has huge faith in the crop of youngsters who train regularly at Melwood and I genuinely believe they are capable of playing a role next season. Williams should be considered Trent Alexander-Arnold’s direct back-up rather than James Milner.”

It seems likely that Williams would only receive piecemeal game-time next season due to Alexander-Arnold’s firm grip on the right-back position but, if the 21-year-old were (heaven forbid) to suffer a long-term injury like Clyne has done, his younger backup might be thrown into the fray to carve out a regular place in the team, just like the West Derby native has managed. The early signs are that Williams would not be fazed by such a prospect.

Liverpool fans, do you expect Williams to become Alexander-Arnold’s main alternative next season? Can you see the 19-year-old having as big an impact at Anfield as the England right-back? Comment below with your views!