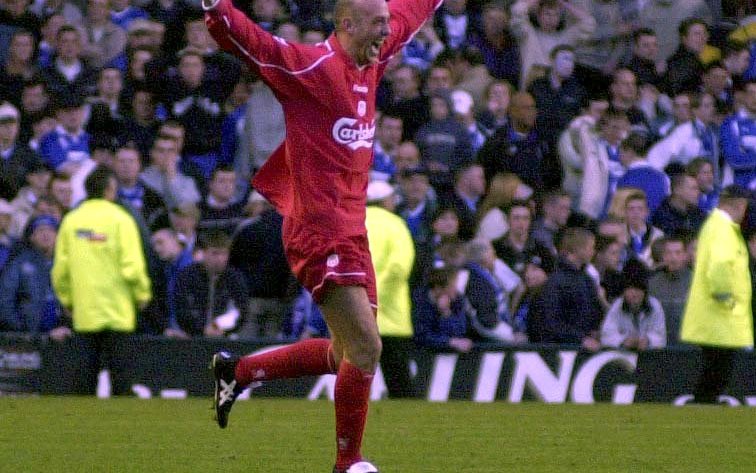 Gary McAllister may have seemed a perplexing signing for Gerard Houllier to make when the then-Liverpool manager brought the Scottish midfielder to Anfield in the summer of 2000 at the age of 36.

However, the veteran would end up producing one of the highlights of a glorious season in which the Reds won three cup competitions. On 16 April 2001, he netted a Merseyside derby winner like no other, scoring with a stoppage time free kick from 44 yards out to give Liverpool a 3-2 victory away to Everton (as per liverpoolfc.com). It proved pivotal by the season’s end as the Reds claimed the third and final Champions League spot by one point ahead of his former club Leeds.

On the 19th anniversary of McAllister’s epic free kick winner at Goodison Park, here are five facts about his time at the club which may have evaded your attention:

His last-gasp heroics at Goodison Park not only won the match for Liverpool; it laid to rest a prolonged curse for the Reds at the home of their Merseyside neighbours. Prior to that derby on Easter Monday 2001, Liverpool had gone 10 and a half years since winning away to Everton, previously doing so in the old First Division in September 1990. The intervening 11 derbies at Goodison Park had all resulted either in home wins (five) or draws (six), starting with the 4-4 draw in the FA Cup in 1991 which preceded Kenny Dalglish’s shock resignation. [via TransferMarkt]

McAllister’s goal didn’t just stop the Goodison Park rot for Liverpool; it ultimately began a sequence of four successive wins at the venue for the Reds, who seemed quite determined to make amends for a decade-long ghost.

Even if McAllister had never scored again for Liverpool afterwards, that moment alone would have been enough to seal his place in Anfield folklore. Instead, it set in motion an unforgettable end to the season for both him and his club.

Three days later, he scored the decisive penalty in the UEFA Cup semi-final win over Barcelona and also found the net in the incredible 5-4 defeat of Alaves in the final, as well as providing three assists that night in Dortmund. That match capped a trophy treble from 2000/01 which also included the League Cup and FA Cup.

In the Premier League, McAllister’s derby goal triggered a sequence of scoring in four successive games, following it up with goals in wins against Tottenham, Coventry and Bradford. Liverpool won six of their final seven league games that season to pip Leeds to third place.

McAllister spent just two seasons at Liverpool, playing 87 matches in total for the Reds, and five of those games ended with him holding a trophy aloft. He played against Birmingham in the League Cup final, Arsenal in the FA Cup final, Alaves in the UEFA Cup final, Manchester United in the Charity Shield and Bayern Munich in the UEFA Super Cup (as per TransferMarkt).

By the time his Anfield career ended, 5.74% of McAllister’s Liverpool appearances came in matches which ended with the Reds savouring a trophy presentation, a remarkable feat from a relatively short time at the club.

McAllister began his senior career at Motherwell in 1981 and ended it at Coventry 22 years later (as per Soccerbase). He won seven trophies over the course of those two-and-a-bit decades – five of which came during a six-month period at Liverpool. His sequence of silverware with the Reds began with the League Cup final triumph in Cardiff on 25 February 2001 and the quintet was completed with the UEFA Super Cup on 24 August that year.

The only other trophies he won as a player were both with Leeds in 1992, the final First Division title before the advent of the Premier League and the following season’s Charity Shield. If McAllister’s trophy haul was represented in a pie chart, 71.4% would be shaded in Liverpool red.

5 – He took some cheeky liberties with that goal against Everton!

McAllister reflected on his famous free kick against Everton in an interview with Liverpool’s official website this week and he was honest enough to admit that he may have taken some geometric licence with the placement of the ball as referee Jeff Winter had his back turned before the Scot struck the ball.

He told liverpoolfc.com: “The spray and VAR would not be good for that one! I don’t know if I was intentionally trying to get it closer, I was just trying to spin it on a bit of better grass or something. That’s my excuse!”

Such are the small margins that can help to make history.

Liverpool fans, what are your memories of McAllister’s time at the club? Let us know in the comments section below!