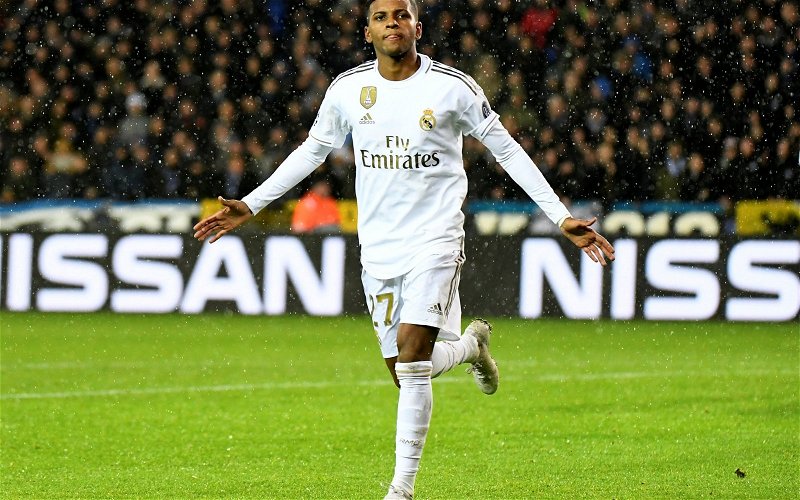 Liverpool could have had Brazilian teenager Rodrygo at Anfield before he eventually sealed a transfer to Real Madrid, according to a revelation from his agent.

In a live chat with Brazilian journalist Jorge Nicola on YouTube [via Daily Express], Nick Arcuri claimed that the Reds’ director of football Michael Edwards had contacted him just before the winger signed his first professional contract at Santos as a 16-year-old three years ago, with Jurgen Klopp apparently being wowed by the prodigy following an online search.

Arcuri said: “When Rodrygo went to make his first professional contract with Santos, aged 16, a Liverpool director called me. He said that Klopp already knew the player, had seen the material, had already come to see Rodrygo personally. He had entered YouTube, searched ‘talents from Brazil’, Rodrygo had appeared and he was very young. He came to Brazil, liked him.” [Jorge Nicola on YouTube, via Daily Express]

What could Rodrygo have brought to Liverpool?

Despite Liverpool’s early interest in the teenager, he signed a €45m (£39.3m) deal with Real Madrid in 2018 which saw him move to Spain the following summer. Although the 19-year-old has only started intermittently for Zinedine Zidane’s team this season, he has often made an impression whenever he has been given a chance, with seven goals from just 18 first team appearances over 1,010 minutes of game-time (one goal per 144.29 minutes).

Three of those goals came in a 6-0 Champions League drubbing of Galatasaray, which made him the youngest player to score a ‘perfect’ hat-trick in the competition’s history, as noted by the Daily Express. He also provided an assist in that game.

Playing mainly as a right winger, but also occasionally lining out on the left flank, the Brazilian teenager has averaged 0.9 shots, 0.9 key passes and one successful dribble in La Liga this season, with an impressive passing accuracy of 89.4% indicating that he is quite composed when in possession of the ball. [via WhoScored]

Liverpool may have missed the boat on Rodrygo

Despite the enormous success of Mohamed Salah at Liverpool since his move in 2017 (44 goals in his first season at the club and 91 goals from 144 appearances so far), the Reds’ inability to sign Rodrygo despite apparently being the first to register an interest feels like a rare missed opportunity from Edwards.

The Brazilian teenager has not looked out of place at Real Madrid and, having missed out on him, Liverpool went on to sign Xherdan Shaqiri as a right winger alternative to Salah in 2018. The Switzerland international has managed only seven goals in 40 games for the Reds across 1,669 minutes of game-time (one goal per 238.43 minutes) and has barely featured this season. It’s hard to escape the feeling that Rodrygo, who has a far better scoring average than Shaqiri, would have provided much stiffer competition to Salah at Anfield, especially with him being nine years younger than the Swiss winger.

While Edwards deserves huge commendation for his role in bringing Salah to Liverpool, it seems a real pity that he didn’t succeed in nabbing Rodrygo despite the Reds spotting his talent before Real Madrid swooped.

Liverpool fans, do you think the club missed a trick by not signing Rodrygo despite reportedly being the first European side to show an interest in him? Comment below with your views!