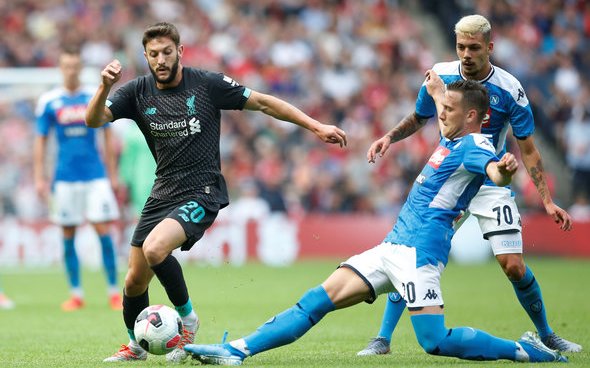 Liverpool prospect Neco Williams has cited team-mate Adam Lallana as a role model at Anfield, singling out the 31-year-old as a player who consistently gives feedback and drives standards among the squad.

The teenage right-back was speaking to Neil Jones for Goal.com when he spoke glowingly about Lallana’s influence in offering advice and encouraging him to constantly improve his game. Williams said of his Liverpool team-mate: “He’s the one who stood out for me. Every session he would try and help me, ask me stuff, listen to me.

“He’s a character where if you give the ball away he will get at you and tell you, but if you do something good then he’s the first to say well done to you. It’s great to have people like that at Melwood, and that has definitely improved me as a player.

“You need people to push you and keep your standards high. Lallana is excellent at that, he knows when the right time is to praise and the right time to get on to you. He pushes you to your limits.”

While Williams will likely want to emulate Trent Alexander-Arnold as a young right-back who emerged from Liverpool’s academy to become an established first team presence, it is interesting to hear him speak of Lallana’s strong influence on the training ground.

The midfielder may have been a peripheral presence in the first team squad over the last three seasons in terms of starts made but, having been captain of Southampton at the age of 25 before his move to Liverpool in 2014, his leadership traits have been apparent for a number of years. Also, he is the fourth oldest player in the Reds’ squad and the second oldest outfield player, and one with experience of more than 440 senior matches, so he is well placed to act as an influential guiding hand for teenage prospects such as Williams.

Alas, the 18-year-old might not have much more to time to benefit from Lallana’s training ground influence, with the veteran midfielder expected to leave Liverpool this summer once his contract expires (as per Liverpool Echo). While the 34-cap England international might not feature much on matchdays for the Reds, his influence on the training pitch and on youngsters like Williams marks him out as someone who still contributes plenty to Jurgen Klopp’s squad and who is likely to be missed if, as seems likely, he moves on from Anfield in the next few months.

Liverpool fans, were you intrigued to hear Williams citing Lallana as such a strong influence? Do you think the experienced midfielder will be missed if he leaves in the summer? Comment below with your views!