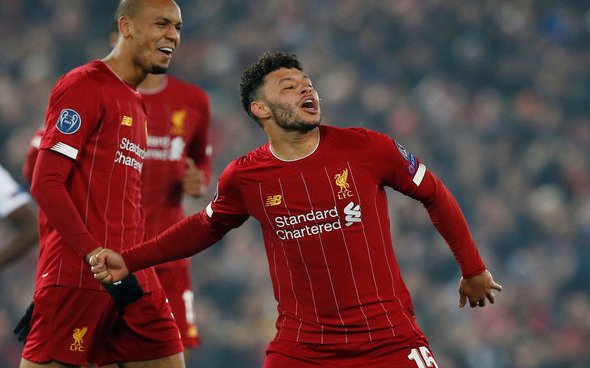 Liverpool midfielder Alex Oxlade-Chamberlain has opened up on the reasons for choosing to leave Arsenal and join the Reds in the early weeks of the 2017/18 season.

The 26-year-old revealed that he decided to move on from the Gunners due to Arsene Wenger’s reluctance to consistently play him in the centre of midfield, the England international’s preferred position. He told the Evening Standard: “I wouldn’t say I wanted to leave Arsenal because I didn’t believe we could win. I just didn’t believe I was going to be able to play where I wanted to play and that was it.”

He added: “I feel a lot of my best performances for Arsenal came in midfield but I never played consistently in that position. The first game of that season I switched with Hector [Bellerin]. First game I played on the left [wing-back], he played on the right and second game we switched. I thought ‘I’ve got to take the risk, I’ve got to take the chance’. I don’t want to look back at the end and think I didn’t try.”

In 198 games for Arsenal, Oxlade-Chamberlain was used mainly as a right-sided midfielder or winger, playing just 29 times in either a central or attacking midfield role (as per TransferMarkt). He registered a modest scoring tally of 20 goals in a Gunners shirt, averaging one every 9.9 appearances. As shown by TransferMarkt, Wenger often shunted him from one position to another during his time at the Emirates Stadium, even playing him as a wing-back during the latter part of the player’s Arsenal career. Even in the early weeks of the 2017/18 season just before his move to Liverpool, he was switched from one wing to the other, his final appearance for the Gunners coming in a 4-0 hammering at Anfield.

Jurgen Klopp has also utilised Oxlade-Chamberlain in several positions at Liverpool but, unlike Wenger, he has chiefly preferred to deploy the 27-year-old in his preferred central midfield role (as per TransferMarkt). The England international has scored 12 times in 78 games for the Reds (one goal every 6.5 appearances), with eight of those goals coming from a central or attacking midfield position. His notably superior goal average at Liverpool compared to Arsenal, combined with Klopp’s greater tendency to play him through the middle compared to Wenger, vindicate his preference to play in midfield rather than out wide or in a full-back role.

Whether Oxlade-Chamberlain told Klopp straight out that he wanted to play in a central midfield role is unknown. What has become evident during the player’s time at Liverpool is that his manager has frequently gotten a tune out of him by deploying him in that position regularly, much to the benefit of both player and club and, in the process, vindicating the midfielder’s decision to leave London for Merseyside.

Liverpool fans, do you think Oxlade-Chamberlain is best suited to a central midfield role rather than a wide position? Comment below with your views!