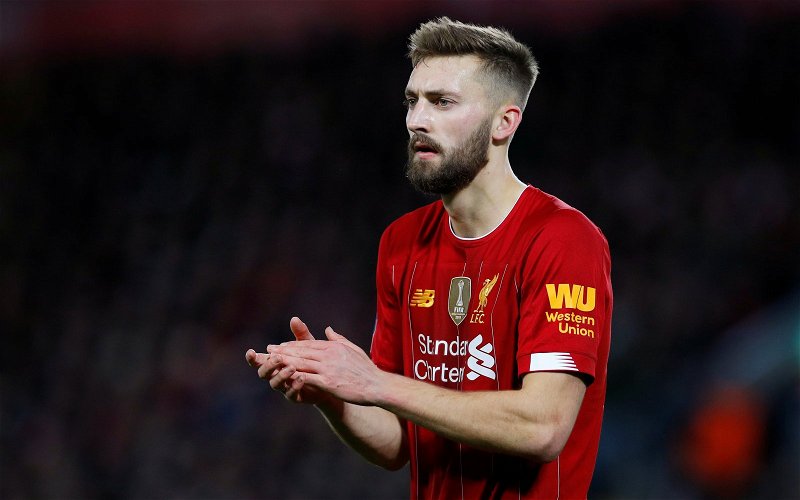 Liverpool defender Nathaniel Phillips, currently on loan at Stuttgart, is being targeted for a second loan spell next season by the 2. Bundesliga club.

A report in German media outlet Bild claimed [via HITC] that Stuttgart are favourites to secure another loan deal for the 23-year-old if they secure promotion to the top flight, something they are on track to achieve as they currently lie second in 2. Bundesliga.

The centre-back was recalled from his loan spell in Germany over the winter and made his senior Liverpool debut in the FA Cup win over Everton in January. He played his part in the Reds’ 1-0 victory that evening, winning one tackle and making three clearances, before he resumed his loan with Stuttgart the following week. His display against the Toffees was lauded by a number of Reds supporters.

Phillips has enjoyed a solid campaign with Stuttgart, averaging 4.8 successful aerial duels and winning 1.7 tackles per game. He has also racked up an impressive match average of 79.4 passes, recording an accuracy rate of 85.4%. His spell in Germany has finally enabled him to play regularly at senior level, with 19 appearances for Stuttgart and 14 league starts. He has helped them to achieve six of their eight clean sheets in the league so far this term.

He currently has four senior centre-backs ahead of him in the queue at Liverpool but that number could be trimmed if Dejan Lovren, linked with a summer move by the Daily Mail, departs Anfield in the summer. That might open the door for Phillips to be kept by his parent club as a squad member, although transfer links with Ben White of Leeds (Sky Sports), Sevilla’s Diego Carlos (Estadio Deportivo, via Sport Witness) and Ousseynou Ba of Olympiakos (Don Balon) would suggest that Jurgen Klopp is looking elsewhere to restore his complement of four centre-backs if Lovren goes.

With this being the first season in which the 23-year-old has played regular first team football, and with a complete lack of top-flight experience, perhaps Klopp feels that a year on loan in the Bundesliga (should Stuttgart get there) may be the best option for the player. Also, as recent months have shown, Liverpool should have the option of recalling him to Anfield if needed, with Phillips showing against Everton that he seems capable of rising to the occasion if called upon.

Liverpool fans, would you favour another loan move for Phillips next season or would you rather see him being kept at Anfield as defensive cover? Have your say by commenting below!