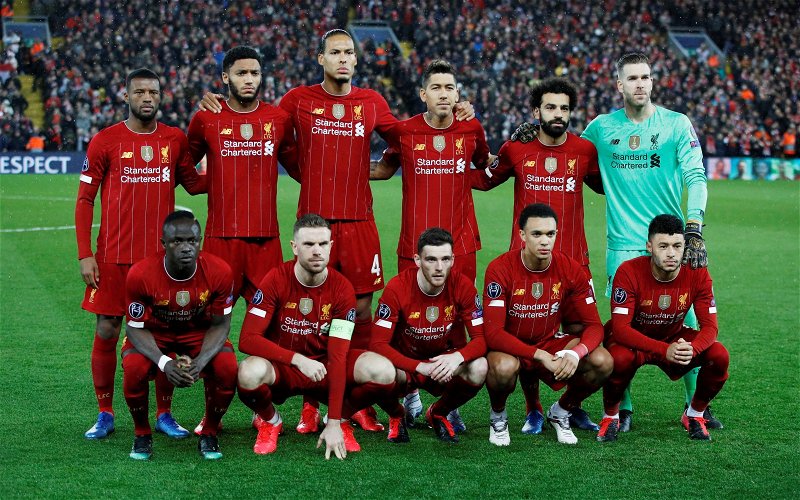 The stoppage of football due to the coronavirus pandemic meant that the PFA Awards, which usually occur towards the end of April, were not held over the weekend. However, that didn’t stop The Athletic’s journalistic staff from making their own selections on the pick of the Premier League crop this season.

The media outlet’s Premier League Men’s Team of the Year was dominated by Liverpool players, which should come as no surprise given the Reds’ 25-point lead at the top of the league. Alisson was selected in goals while Andrew Robertson, Virgil van Dijk and Trent Alexander-Arnold (who was also chosen as Men’s Young Player of the Year) were included in defence. Jordan Henderson was picked in midfield while Sadio Mane and Mohamed Salah both made the three-man forward line.

The Leicester duo of Caglar Soyuncu and Jamie Vardy, along with Manchester City’s Kevin De Bruyne and Aston Villa’s Jack Grealish, completed the men’s XI chosen by The Athletic‘s writers.

Agree/disagree? Let us know who'd make your Team of the Year.#TAUKAwards

While the selections naturally raised huge debate on Twitter (via @TheAthleticUK), a good case can be made for the inclusion of all seven Liverpool players to make the Men’s Team of the Year:

The quality of the Brazilian goalkeeper has been in evidence when he has been out of the team as well as in it. Two spells out injured have curtailed his involvement somewhat this season but, when he has played, he has continued to excel. He has been beaten only 11 times in 20 Premier League games (0.55 goals conceded per game) and kept 10 clean sheets (50% of games), just one fewer than the league high currently set by Burnley’s Nick Pope (who has started all 29 of their matches).

Adrian, who has covered in the absence of Alisson, has conceded 10 goals in 11 appearances (0.91 goals per game) and managed only two clean sheets (18.2% of games). In summary, the Brazilian has played just over two-thirds of Liverpool’s Premier League games in 2019/20 and the team have let in only one goal fewer without him on the pitch than with him.

The Scot has again been an excellent attacking outlet from left-back, with a goal and seven assists in 28 league games this season, following on from the 11 assists he recorded in 2018/19. He truly showed his value to the team during the autumn with five assists in a nine-game spell which also included a late equaliser in a dramatic 2-1 win at Aston Villa.

Robertson has won the most tackles per game (1.7) of anyone among Liverpool’s back-line and averaged 1.5 key passes per game, the third highest of any defender in the Premier League. It has been another splendid season from the 26-year-old.

Liverpool had the best defence in the 2018/19 Premier League with him starting every game and they have also conceded the fewest goals this term in a campaign during which he has been ever-present. In an 11-match spell from early December to mid-February, the Dutch centre-back scored as many league goals as his team conceded – one (as per TransferMarkt).

Nobody in Jurgen Klopp’s squad has made more clearances per game (4.7) and his match average of 4.9 successful aerial duels is eclipsed marginally by only two players at Liverpool. He also has the second highest passing success rate (89.2%) of any Reds player to start a league game this season (as per WhoScored). Van Dijk has excelled in numerous metrics during 2019/20.

A further 12 Premier League assists, matching his total from last season, is a clear reflection of the huge attacking influence that the 21-year-old has from the right-back position. Only De Bruyne (a midfielder) has a higher assists tally in the league, with that duo the only two players in double figures for goals created this season (as per WhoScored), while he has recorded more key passes per game (2.6) than any of his team-mates.

It isn’t just in attack that he has contributed significantly, either. He ranks in the top five Liverpool players for successful tackles (1.6), interceptions (1.2) and clearances (2.1) per game [via WhoScored], testifying to his defensive diligence as well as his enterprising right-flank raids.

Liverpool’s captain has led the way in terms of tackles per game (2.2) this season while he has also chipped in with his share of goal involvements. His three goals included ultimately pivotal strikes against Tottenham and Wolves and he has also contributed five assists, including three in a four-game spell prior to suffering a hamstring injury in February (as per TransferMarkt).

In his subsequent absence, the Reds went from shipping one goal in 11 league games to six goals in three and lost their unbeaten status in the division in a 3-0 defeat at Watford. Even in a team as formidable as this Liverpool side, they appear considerably weaker when Henderson isn’t a part of it.

Last season’s joint-top Premier League scorer has again been the most prolific left winger in the division this term with 14 top-flight goals. Several of those have come at crucial times for Liverpool, including his stoppage time winner at Aston Villa along with decisive late strikes in one-goal victories over Norwich and West Ham in February.

He has also contributed nine league assists for the Reds and it is a sign of his wonderful consistency that his longest streak without a goal in the division this season has lasted only three games (as per TransferMarkt). He has also completed the most dribbles per game (1.9) among Klopp’s squad and fully merits his inclusion in the Team of the Year.

If the Premier League season resumes, there is every chance that Salah could win the Golden Boot for a third successive year. His tally of 16 goals is only three behind leading marksman Jamie Vardy, who prior to netting a brace against Aston Villa before the season was halted had scored just once in nine league games for Leicester (as per WhoScored).

The Egyptian has had some memorable strikes throughout the season, including his flicked finish against Watford and his stoppage time breakaway goal to seal victory over Manchester United. The next most prolific right winger in the Premier League is Riyad Mahrez on seven goals, so Salah is more than worthy of inclusion among any best XI of the season.

Liverpool fans, what did you make of The Athletic’s Team of the Year picks? Join in the discussion by commenting below!