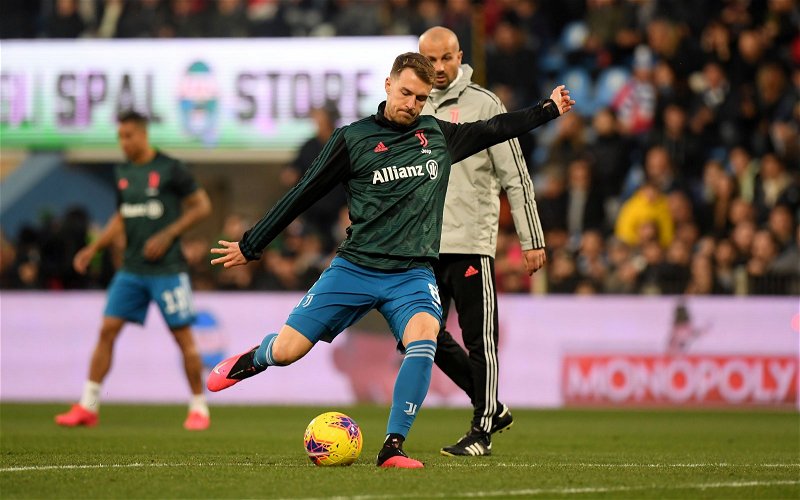 Liverpool are believed to be among several Premier League clubs hopeful of bringing Juventus midfielder Aaron Ramsey back to the English top flight.

A report from Transfer Market Web claimed that the Reds are joined in the chase for the ex-Arsenal player by Manchester United and Chelsea, with the Gunners also thought to be considering an Emirates Stadium reunion for the 29-year-old.

Sports journalist Paul Tomkins claimed on Twitter last year (via @paul_tomkins) that Liverpool could have signed Ramsey in the early stages of his career as he has been at Melwood during Rafael Benitez’s time in charge ahead of a proposed £1m move which fell through because the club already had Jay Spearing.

Rafa told me that he had Aaron Ramsey at Melwood a few months before he joined Arsenal, ahead of a move of about £1m. His account was that he was told we had Jay Spearing, so couldn’t complete the move

The Wales midfielder has an abundance of Premier League experience, having played 262 games in the division for Arsenal before his free transfer to Juventus last year and scored 65 times in total for the Gunners.

Ramsey has not been as prolific in Italy, with just four goals for the Bianconeri, although he had hit a fruitful spell just before Serie A was halted due to coronavirus, scoring in consecutive league matches against SPAL and Inter Milan – he also provided an assist in the 2-0 win in the latter game. [via TransferMarkt]

With a match average of 1.4 shots, he could bring some attacking impetus to Liverpool’s midfield, in which only Alex Oxlade-Chamberlain (1.5 shots per game) has displayed a greater tendency to try for goal. Also, his solid passing success rate of 87.6% is better than the likes of James Milner (86.7%), Fabinho (85.4%), Jordan Henderson (84.5%) and Oxlade-Chamberlain (83.1%).

Another reason why the Reds may be looking at Ramsey is the expected departure of Adam Lallana this summer. The ex-Southampton midfielder turns 32 next month and has racked up more than 400 appearances for the Saints and Liverpool, so his exit would deprive Jurgen Klopp’s squad of a vastly experienced midfield presence – albeit one who is on the fringes of the squad, having started only three Premier League games all season.

Ramsey’s injury troubles should be a red flag for Liverpool

Part of the reason for Lallana’s fade to being mostly a squad player is the long-term injury he suffered in pre-season in 2017, since when he has made a paltry nine league starts having been a fixed first team presence the year before.

Unfortunately, Ramsey is no stranger to the treatment table himself. Injuries were a recurring theme of his Arsenal career, not least his horrendous leg break back in 2010, and he has had a series of knocks throughout the last few months at Juventus as well. Lumbago, muscle injury, abductor problems and a stress response of the bone have all sidelined him at various intervals of the current season (as per TransferMarkt). Also, for a midfielder of his attacking instincts and considering his scoring return for Arsenal, that he had scored only one Serie A goal prior to late February seems slightly disappointing.

Ramsey is the same age now that Milner was in 2015 when he came to Liverpool and, while the 34-year-old has gone on to make more than 200 appearances for the Reds and score some vital goals, the age profile of the Wales midfielder and his lengthy string of injury concerns should trigger Klopp to look elsewhere in his efforts to replace Lallana.

Liverpool fans, do you think Ramsey could be a good addition to the squad if the Reds were to sign him or is his age and injury record a deal-breaker? Join in the discussion by commenting below!