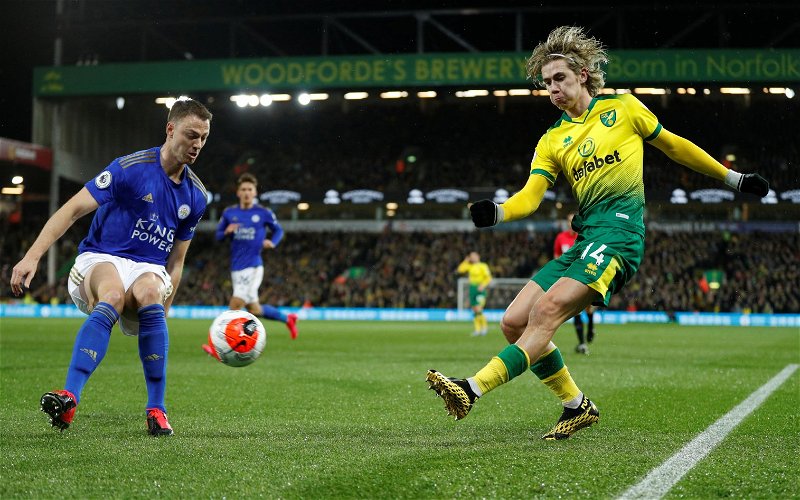 Liverpool have prioritised the addition of a midfielder in the summer transfer window and are focused more on adding strength in depth rather than making a marquee signing.

That is according to journalist Dean Jones, who was asked about potential incomings at Anfield in a Q&A for Bleacher Report. He stated that, aside from long-time transfer target Timo Werner, the Reds are seeking to bring in the English duo of Norwich’s Todd Cantwell and Kalvin Phillips of Leeds.

He said: “Outside of Werner, they want a midfielder, but it would be more of a squad player like Cantwell from Norwich or Kalvin Phillips of Leeds. I think that gives you an idea of how Liverpool wants to strengthen and add depth rather than another elite signing.”

What could Todd Cantwell and Kalvin Phillips bring to Liverpool if signed?

Cantwell has stood out at the Premier League’s bottom club Norwich this season, plundering six goals and providing two assists for the Canaries. He has played mainly on the left-hand side of midfield in the current campaign but has also switched to the right flank on occasion and can even play an attacking midfield role if needed. [via TransferMarkt]

The 22-year-old has averaged 1.3 shots, 1.5 successful dribbles and 1.1 key passes per game in the 2019/20 Premier League, completing 81.3% of his attempted passes (as per WhoScored). His tally of six league goals is a solid return considering that he doesn’t play as a striker and features for the joint-least prolific team in the top flight, with Daniel Farke’s side managing only 25 league goals so far this season.

Defensive midfielder Phillips has been a mainstay of a Leeds side who sit top of the Championship and are well on course for promotion, starting 34 matches in all competitions this term. As noted by HITC, he has been lauded by ex-Liverpool midfielder Danny Murphy, who told talkSPORT: “He’s got everything. He’s calm, tenacious, good passer of the ball. He plays his role well.”

The 25-year-old has been a sturdy midfield anchor at Elland Road, averaging 2.8 successful tackles and 1.3 interceptions per game this season. He also has an eye for a killer pass, with a match average of 1.9 key passes, as well as keeping play ticking over with an average of 54.8 passes per game. [via WhoScored]

Cantwell and Phillips could be useful backup options at Liverpool

Cantwell’s six-goal haul for the season is bettered only by Alex Oxlade-Chamberlain among Liverpool’s midfield, so he could certainly add a goal threat for the Reds if they were to bring him to Anfield. However, with Jurgen Klopp tending to pick a narrow three-man midfield, the 22-year-old may find it hard to feature in his natural position if he were to join Liverpool, while he would be highly unlikely to regularly displace 18-goal Sadio Mane in a left-sided attacking role in the Reds’ line-up.

Phillips has won more tackles per game than any player at Liverpool this season, while only right-back Trent Alexander-Arnold among Klopp’s squad has averaged more key passes per game (as per WhoScored). That mixture of steel and effective distribution marks him out as someone who could be a very good option, although the first-choice midfield trio of Fabinho, Jordan Henderson and Georginio Wijnaldum could be difficult to displace.

Cantwell and Phillips may be useful squad additions for Liverpool to have but neither would seem likely to immediately break into the first XI if they were to end up at Anfield.

Liverpool fans, do you think Cantwell and Phillips could be worth pursuing as potential squad options or should the Reds focus instead on midfielders operating at a higher level? Have your say by commenting below!