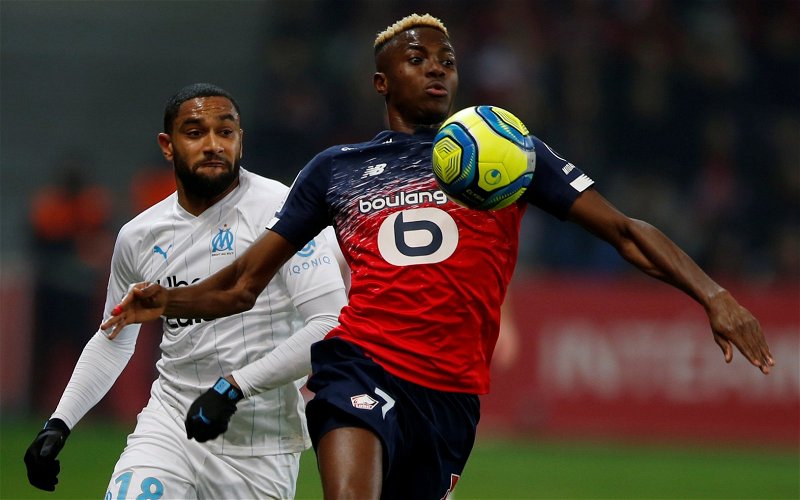 According to reports from French media, Liverpool have opened talks with Lille centre-forward Victor Osimhen about a possible move to Anfield in the summer.

Le10 Sport claimed that the Reds have begun negotiating with the 21-year-old’s agents about a potential deal for the player, who has scored 18 goals for the Ligue 1 club this season and who has been the subject of offers from clubs around Europe.

According to Le10 Sport, a number of other Premier League sides have also signalled an interest in the Nigeria international, for whom Lille would seek a fee in the region of €70m-€80m (£60.9m-£69.6m).

Osimhen is, first and foremost, a reliable goal-scorer, with 18 in 38 matches for Lille in his first season at the club. That tally has been scored in 3,012 minutes of game-time, giving him an average of one goal every 167.33 minutes, a better ratio than any of Liverpool’s main front three.

Sadio Mane has the same number of goals from 3,049 minutes this season (one per 169.39 minutes), Mohamed Salah has scored 20 times in 3,423 minutes (one goal per 171.15 minutes) and Roberto Firmino has managed only 11 goals across 3,339 minutes of game-time (one per 303.55 minutes). Indeed, Osimhen has a greater goal tally than Liverpool’s two main centre-forwards combined – Firmino’s 11 is followed by Divock Origi with a modest five-goal return from 1,239 minutes (one every 247.8 minutes).

The Nigerian has an impressive hit ratio in comparison to Jurgen Klopp’s current attackers and that is not altogether surprising given that he records 3.2 shots per game, a higher average than Firmino (three) and Mane (2.3). The Lille centre-forward also poses a significant aerial threat, winning 4.4 aerial duels per game, a trait which should enable him to capitalise on deliveries from full-backs Trent Alexander-Arnold and Andrew Robertson if he were to end up at Anfield.

However, Osimhen has one flaw which could raise red flag for Liverpool

The Nigerian’s scoring record marks him out as a centre-forward who can be relied upon to deliver that all-important trait of finding the net regularly, although his goal return masks a significant flaw to his game, namely his passing ability.

Unless he’s putting the ball in the net, Osimhen frequently wastes possession, with a poor passing success rate of only 61.4%, almost 10% lower than Liverpool’s worst performer in this regard. Also, he averages just 12.7 passes per game – superior to only three Reds players, two of whom have played fewer than 100 Premier League minutes.

Part of the reason why Liverpool’s attack clicks so masterfully is Firmino’s willingness to drop deep and contribute to link-up play. Osimhen may be a more potent poacher in the box but, in order to get the best out of that trait, the Reds would likely need to alter their approach play, something that might not be too advisable given that their current style has taken them to the brink of winning the Premier League.

Also, while the Lille forward may have a fine scoring tally, it is still only two-thirds of what fellow Liverpool transfer target Timo Werner has managed (27) for RB Leipzig this season. If the Reds are unable to clinch a deal for the German, any subsequent signing of Osimhen could have an anti-climactic feel of ‘settling for second best’ about it.

Liverpool could certainly do a lot worse than the Nigerian, yet there is also a sense that they can do better.

Liverpool fans, do you think Osimhen would be a good addition given his goal return or do you fear that he wouldn’t fit into the Reds’ style of play? Join in the discussion by commenting below!