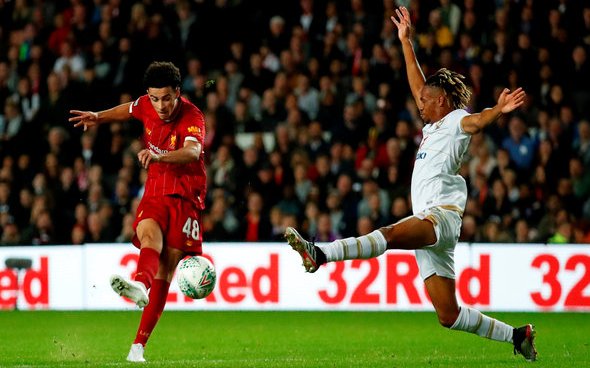 Having been rebuffed twice for Liverpool youngster Curtis Jones in the January transfer window, Rangers could again try their luck at bringing the 19-year-old to Ibrox.

Football Insider reported that Steven Gerrard’s side could launch another bid to take the teenage midfielder on loan in the summer, despite having two similar offers in early and late January rebuffed by the Reds.

The Rangers manager has used his Liverpool connections to bring several players from Anfield to Ibrox either on loan or permanently, including Ryan Kent, Jon Flanagan, Sheyi Ojo and Ovie Ejaria.

With Jones making an impression at first team level for the Reds but yet to establish himself in the senior ranks, Gerrard is hopeful that he can again draw upon his standing as the club’s former captain to take the youngster on loan and offer him regular senior game-time in Scotland.

There would be some logic to the 19-year-old going on loan to Rangers, not least the increased likelihood of regular minutes. The link-up with a Liverpool legend in Gerrard seems an obvious selling point and, as well as playing top-flight football, the ‘Gers could offer European action – assuming that any potential premature finish to the Scottish Premiership would not see their clubs barred from continental tournaments next season.

Jones is still an emerging talent with only nine senior appearances to his name and is still awaiting a full Premier League debut, along with a taste of Champions League football. Unlike other positions in Liverpool’s squad where options are sparse, Jurgen Klopp has a multitude of midfield options from which to choose, with Fabinho, Jordan Henderson and Georginio Wijnaldum establishing themselves as the preferred trio when they are all fit and available.

However, Football Insider claimed that Klopp has high hopes for the teenager at Anfield and could consider keeping him at the club as a backup member of the first team squad. The young midfielder has shown with his outstanding goal against Everton in the FA Cup and his conversion of the decisive kick in a Carabao Cup penalty shoot-out triumph over Arsenal that he is not fazed by the senior stage. He also gave a commendable performance in the FA Cup defeat at Chelsea last month, drawing praise from numerous Liverpool fans for his efforts that night.

Should the Premier League resume over the summer and the Reds swiftly pick up the two wins they need to be confirmed as champions, Klopp may decide to give precocious young talents such as Jones a chance to impress in the concluding matches of the season. If that happens and the midfielder seizes his opportunity, there should be increased likelihood that Liverpool would make him a fixture in the first team squad rather than farming him out on loan.

Liverpool fans, would you favour a loan move to Rangers for Jones or should Klopp keep him at Anfield and integrate him fully into the senior squad? Have your say by commenting below!