“Was I wrong!” – Jurgen Klopp admits he had a bad first impression of Sadio Mane 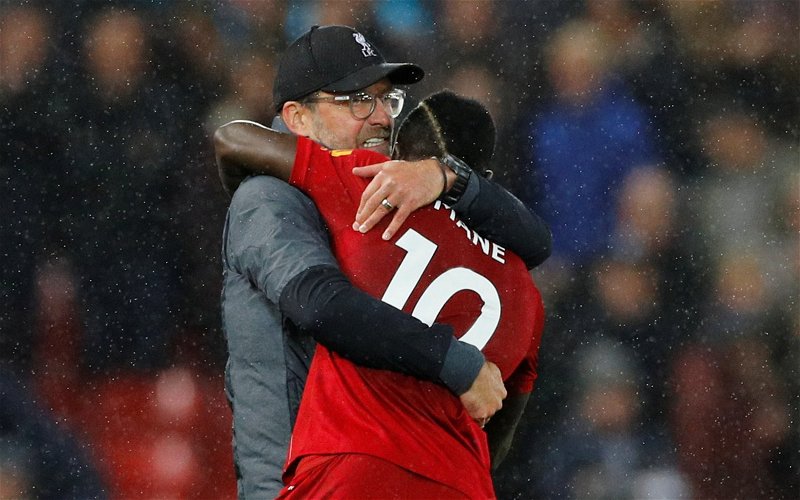 Liverpool manager Jurgen Klopp has admitted that he picked up a negative impression of Sadio Mane when he first encountered the Senegal winger before coming to Anfield in 2015.

Speaking in the Rakuten TV documentary Sadio Mane: Made in Senegal [via The Mirror], which is released today, the German recalled keeping an eye on the forward’s progress at Red Bull Salzburg when he was managing Borussia Dortmund, only to be deterred by his first face-to-face meeting with him.

As quoted in The Mirror, Klopp says in the documentary: “I remember my first encounter with Sadio. It was in Dortmund. There was a really young guy sitting there. His baseball cap was askew, the blond streak he still has today. He looked like a rapper just starting out. I thought, ‘I don’t have time for this.’

“Our team back then really wasn’t bad. I needed someone who could handle not being a starter at the very beginning, someone I could develop. I’d say I have a pretty good feeling for people, but was I wrong. I followed his further career and continuing success in Salzburg. In Southampton, he just dominated.”

Klopp had changed his stance on Mane by the time he took the reins at Liverpool, signing the Senegal international from Southampton in 2016 for £34m (as per BBC) after the forward had scored twice in a 3-2 win over the Reds a few months previously. He had shown with 25 goals in 75 games for the Saints that he was capable of thriving in the Premier League, scoring the division’s fastest-ever hat-trick in 2015 against Aston Villa.

Already comfortable with the English game, Mane struck 13 league goals in his first season at Anfield, more than he had managed in either of his two Premier League campaigns for Southampton, and has hit double figures in the competition every season since (as per TransferMarkt). A goal on his Reds debut against Arsenal helped him to instantly settle and vital contributions against Everton and Tottenham later in 2016/17 were crucial in the Reds ultimately securing a top four finish on the final day of the season.

Having done so much to get Liverpool back into the Champions League, Mane scored in the final of that competition in 2018 and was the Premier League’s joint-top scorer last season, dovetailing brilliantly with Mohamed Salah and Roberto Firmino in the Reds’ attack. A return of 77 goals in 161 appearances to date for the club has shown how brilliant an investment he was and why Klopp can be glad that his initial impression of the 27-year-old did not endure.

Liverpool fans, were you surprised by Klopp’s first impression of Mane? How glad are you that he eventually warmed to the Senegal ace? Share your views in the comments section below!