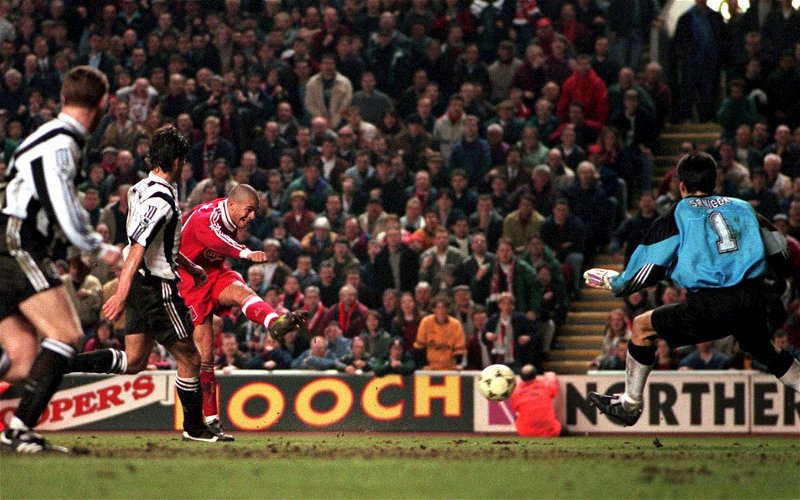 On 3 April 1996, Liverpool legend Kevin Keegan brought his Newcastle team to Anfield in need of a result as the Magpies chased down a first league title in almost 70 years. Only three months earlier, this fixture had looked more like being a coronation for the Tynesiders, who in mid-January had a 12-point lead at the summit.

However, by the time the match came around, Manchester United had reeled Newcastle in and replaced them as Premier League leaders. While those two were the leading contenders, Liverpool weren’t completely out of the title race after a five-game winning surge. Two high-flying teams duly delivered a game for the ages on a Wednesday night at Anfield.

The echo from the referee’s opening whistle had barely subsided by the time the first goal went in, Robbie Fowler getting his head to Stan Collymore’s cross after just 98 seconds to break the deadlock. Newcastle had recently been undone at Arsenal by two early goals and a repeat narrative was threatening to brew, although this time they regained their composure sufficiently to swiftly equalise through Les Ferdinand as he left Neil Ruddock for dead, and then hit the front when the striker turned provider for David Ginola to score. Three goals had been plundered inside the opening 14 minutes.

The enterprising nature of both teams continued apace in the first half, with Fowler, Faustino Asprilla and Ferdinand all passing up decent opportunities to score. Newcastle held the interval lead but were pegged back to 2-2 within 10 minutes of the restart, Steve McManaman charging at the visitors’ defence before providing the cross from which fellow Liverpool youngster Fowler finished to the net.

Just as Keegan’s side had responded quickly to the hosts’ first goal, they would do so again as, within two minutes of parity being restored, a neat 25-yard curled shot from Asprilla beat David James and edged the Magpies back into the lead. By 65 minutes it was 3-3, Jason McAteer whipping in a cross for Collymore to bury to the net. The see-saw nature of the game was maintained in the final quarter as both teams relentlessly pushed for the decisive goal, although none more would arrive as the match entered stoppage time.

John Barnes and Ian Rush, veterans of Liverpool’s last league triumph six years previously, combined with some neat interplay as the Reds had one last raid in Newcastle’s half and the former noticed Collymore in space in the penalty area. The pass was played to the club’s then-record £8.5m signing and he lashed the ball beyond Pavel Srnicek to send Anfield into delirium and finally settle this dramatic contest. All Keegan could do was slump over the nearest advertising board in an image which perfectly encapsulated the magnitude of defeat for a Newcastle team who, for all their efforts, ended up with nothing – on the day or at the end of the season.

Both teams had to concede defeat to Manchester United in the title race, a third triumph in four years for the Old Trafford outfit. In the immediate aftermath of the game, Liverpool manager Roy Evans accurately described it as “kamikaze football” while Keegan acknowledged: “As long as football matches end up like this, people will come and watch and you won’t get empty seats at stadiums because it was a real classic.”

It’s hard to argue with that last remark. A full 24 years after the event, Sky Sports commentator Martin Tyler, he of the timeless “Collymore closing IN!” exclamation for the winning goal, chose this game as his favourite Anfield memory.

*All information sourced from reports from The Independent and The Guardian.

Liverpool fans, what were your memories of the 4-3 win over Newcastle on this day in 1996? Would you described it as perhaps the greatest Premier League match of all time? Comment below with your views!