Danny Mills: Jordan Henderson “will be the hardest player to replace” at Liverpool 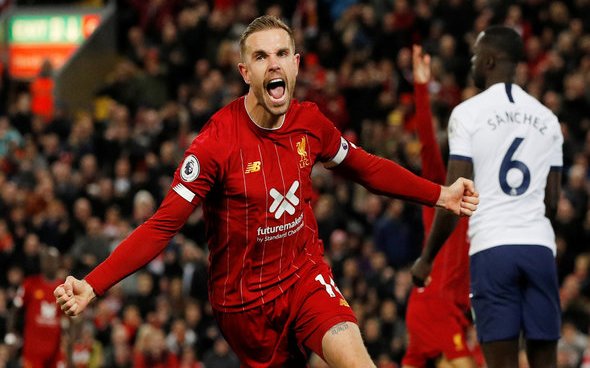 Former England defender Danny Mills hailed Liverpool captain Jordan Henderson as the team’s “driving force” and believes that he “will be the hardest player to replace” among the current squad.

The 29-year-old was chosen by The Athletic writer James Pearce as his Anfield player of the season, while BBC pundit Alan Shearer said on Match of the Day in February [via Liverpool Echo] that the Reds skipper had been the outstanding performer in the whole Premier League in 2019/20.

Speaking to Football Insider about Jurgen Klopp’s squad, Mills said: “It is interesting when you look at Liverpool and how good that midfield is but the one player they will have to replace sooner rather than later is Jordan Henderson. He will be the hardest player to replace – his drive, ambition, desire and professionalism.

“Henderson is not getting any younger. You have Wijnaldum, Keita, Fabinho and Oxlade-Chamberlain coming into form, but Henderson is the driving force. Trying to find a replacement for him will be the hardest thing for Liverpool to do.”

The merits of Mills’ claim that Henderson “will be the hardest player to replace” at Liverpool is open for debate. The attacking trio of Mohamed Salah, Sadio Mane and Roberto Firmino have all made a consistently vital contribution in their time at the club, scoring 91, 77 and 77 goals respectively for the Reds – that combined tally of 245 goals would be tough for any club to replace.

Defensively, the contributions of ever-present centre-back Virgil van Dijk and goalkeeper Alisson in helping Liverpool to ship only 43 Premier League goals since the start of 2018/19 (compared to 80 over the previous two league seasons) have been massive – and 10 of the 21 league goals shipped by the Reds this term have come when the Brazilian hasn’t been on the pitch. From the full-back positions, Trent Alexander-Arnold and Andrew Robertson have contributed 30 and 20 assists respectively since the beginning of last season, an indicator of how crucial they are as attacking outlets.

However, there is some justification to Mills highlighting Henderson as a player who is difficult to replace, with the Reds already suffering when he hasn’t been available. The captain was forced off through injury in the 1-0 defeat away to Atletico Madrid in February and missed the subsequent four matches, during which time Klopp’s team lost their unbeaten Premier League status at Watford and exited the FA Cup against Chelsea. The 29-year-old returned for the second leg against Atletico at Anfield but, having just about won the fitness race to feature that night, he was substituted in extra time as Liverpool collapsed to lose 3-2 and bow out of the competition.

It is purely hypothetical whether the Reds would still be undefeated in the league and on course for a treble if Henderson hadn’t been injured in Spain two months ago but, having lost four times in six games at the time of his injury following just two 90-minute defeats all season, his absence and Liverpool’s slump in form hardly seemed coincidental. In that regard, Mills makes a fair point about the challenge that the Anfield club will eventually face when Henderson leaves.

Liverpool fans, do you agree with Mills’ claim that Henderson will be the hardest player to replace at Anfield? If not, who do you think is the most irreplaceable member of Klopp’s squad? Comment below with your views!