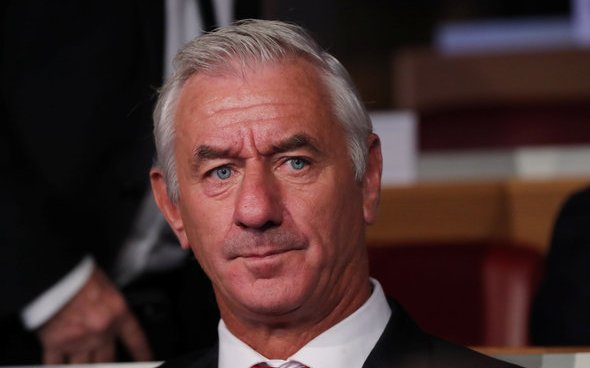 Former Liverpool striker Ian Rush expressed his concerns about the Premier League season potentially finishing behind closed doors, fearing that it would represent an anti-climactic end to the campaign for the table-topping Reds.

Before the coronavirus pandemic led to the shutdown of English football in mid-March, Jurgen Klopp’s team had been 25 points clear at the top of the league and they need just two more wins to ensure a first title triumph since 1990.

However, with Sky Sports‘ Kaveh Solhekol claiming that “games will almost definitely be played behind closed to doors to begin with”, the prospect of the season resuming (and maybe finishing) behind closed doors looks very likely, something with which Rush is not too comfortable.

The Welsh native told The Mirror: “If you’re playing in front of no one it begs the question, would you be any good? Would you be up for it, first of all? Would it be the same as a normal game in front of a big crowd? I don’t think so. It will be like playing a Sunday league game. I don’t think the standard of games will be very good. It will be hard to get ­motivated even if something is at stake. Crowds bring excitement.”

Rush added: “If it doesn’t happen and the Premier League is declared null and void then you have to move on and not let it affect you. This Liverpool team is the best I’ve ever seen and I’m certain they will come again.

“There’s no way Liverpool can be awarded the title without the season being finished. Although it’s understandable it will still be a shame to see games without the fans who are the lifeblood of the game. I wouldn’t be looking forward to the prospect of the matches being staged behind closed doors. Celebrating goals will be strange for a start without there being any crowd ­interaction.”

Rush’s reservations about Liverpool potentially ending their 30-year title drought in an empty stadium are quite understandable. Given how long the Reds have been waiting to reclaim the status of league champions, something that is alien to a generation of supporters, there could well be a sense of anti-climax to laying that ghost with no fans present to witness it and share in that moment with the players.

However, it is questionable whether a behind-closed-doors scenario would negatively impact players’ motivation. This is a Liverpool team which has dropped only five points all season and made a happy habit of scoring late goals, so it’s hard to imagine that they would struggle to rouse themselves when the carrot of winning the club’s first Premier League title is dangling so tantalisingly.

Also, Rush ought not to be so blasé about the scenario of the season being voided. Such an extreme course of action would be extremely hard to swallow for Liverpool, given how long they’ve been waiting to win the league and how sizeable a lead they have earned. Thankfully, the null-and-void scenario looks out of the question, with Sky Sports reporting that all 20 top-flight clubs are keen to finish the season on the pitch.

While Rush makes a fair point about a behind-closed-doors title win for Liverpool potentially having a strange feel, it seems unlikely that such a scenario would deprive the Reds’ players of the motivation to finish a job they had so nearly completed prior to football shutting down.

Liverpool fans, what did you make of Rush’s views on the rest of the season? Do you think winning the title behind closed doors would be a huge anti-climax? Have your say by commenting below!