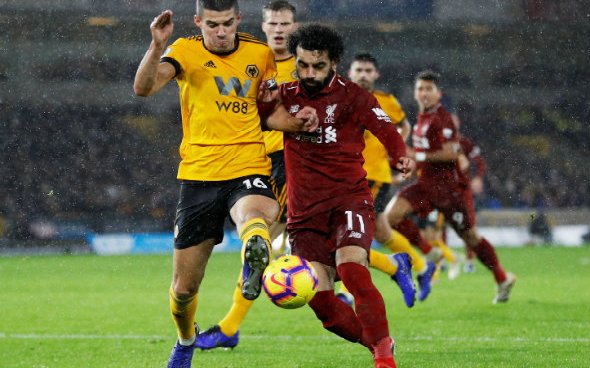 Former Liverpool defender Jamie Carragher lavished praise on another ex-Reds player about whom he drew comparisons with Virgil van Dijk.

In selecting his Premier League team of the season so far for Sky Sports, the pundit made the Dutch defender an automatic selection for one centre-back spot and gave strong consideration to including Wolves’ Conor Coady alongside him before eventually plumping for Van Dijk’s team-mate Joe Gomez.

Carragher stated: “Conor Coady has also done brilliantly for Wolves; he has not missed a minute this season and is probably as good as anyone alongside Van Dijk in terms of passing from the back.” [via Sky Sports]

In one respect, comparisons between Coady and Van Dijk are quite understandable, not just because they play in the same position. The two defenders have both been ever-present in the Premier League this season for Wolves and Liverpool respectively, a testament to the importance placed in them by their managers. Indeed, aside from two Carabao Cup games, Coady has played every single minute for Wolves in 2019/20; while with the exception of domestic cup competitions, Van Dijk has been ever-present apart from the Club World Cup semi-final against Monterrey when he was ruled out through illness. Both clearly possess tremendous stamina to consistently feature from start to finish in games.

However, Carragher’s likening of Coady’s passing abilities to Van Dijk isn’t quite accurate. The Wolves defender has a solid passing success rate of 84.7% in the Premier League, averaging 47.1 passes per game. While those figures are decent in their own respect, they do not stand up to those of the Liverpool centre-back, who has a distribution accuracy of 89.2% and boasts a tremendous match average of 85.4 passes. Not only do Coady’s passing figures trail Van Dijk’s considerably, they are also inferior to Gomez’s, with the 22-year-old completing 88.4% of his 67.1 passes per game.

Coady, who graduated from Liverpool’s academy but only made two senior Reds appearances before being sold to Huddersfield in 2014, was the subject of clamour from some Kopites to be re-signed by the Anfield club shortly after his performance in a hard-fought 1-0 defeat for Wolves away to the Premier League leaders at the end of 2019. While he has become an integral part of Nuno Espirito Santo’s team and was understandably in the conversation for Carragher’s team of the season, the Sky Sports pundit’s comparison of his passing abilities to Van Dijk’s seems a little wide of the mark.

Liverpool fans, what did you make of Carragher’s views on Coady compared to Van Dijk? Do you think the Reds should perhaps consider bringing the Wolves defender back to Anfield? Have your say by commenting below!