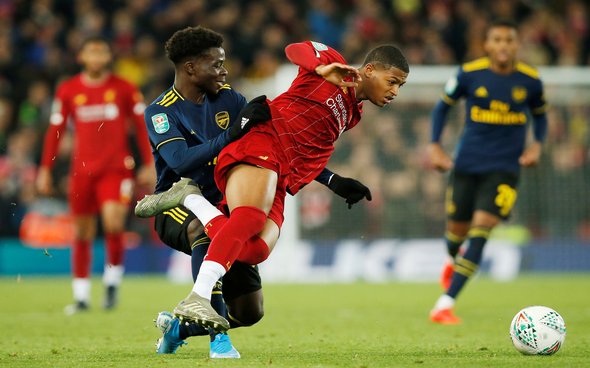 The Ibrox club are managed by former Reds captain Steven Gerrard, who briefly managed Brewster at under-18 level on Merseyside, while Ryan Kent, a one-time team-mate in Liverpool’s underage ranks, now plays with the Glasgow-based outfit.

With Rangers’ leading scorer Alfredo Morelos linked with a move to Atletico Madrid and Jermain Defoe nearing the end of his career, Whelan thinks that Gerrard should look to Brewster, currently on loan at Swansea from Liverpool, as a possible signing.

He told Football Insider: “Gerrard needs striking options. Defoe is coming to the back end of his career and I think Morelos will leave. Brewster might be the key player that Steven thinks he can take for a year. He is a fox in the box and that is what teams want.

“Let him have that full preseason with the team and get bedded in. With the likes of Ryan Kent, who Rhian will already know, that relationship will ease him in and of course, he will know Steven as well. Steven will know what kind of character and quality he is getting from the player.”

Whelan mentions a few valid reasons why a loan move to Rangers might be a good option for both them and Brewster. As he said, the 20-year-old knows both Kent and Gerrard from his time with Liverpool’s underage teams, which could help him to settle in quickly and develop an immediate relationship with the pair at Ibrox.

While still quite young, Brewster has found it very difficult to get his break at Liverpool, where he has made just three first team appearances (all in domestic cup competitions). Since going on loan to Swansea in January, he has played regularly and that game-time has borne fruit, with four goals in 11 games in the Championship. With the likes of Roberto Firmino, Divock Origi and possibly Timo Werner standing in his way at Anfield, the 20-year-old couldn’t realistically expect to get many first team opportunities at his parent club in the short-term future.

Brewster may be seeking to emulate fellow Liverpool loanee Harry Wilson, who has been given regular Premier League action at Bournemouth this season after a prolific spell with Derby at Championship level, and try his luck on loan with another English top-flight side next term. Rangers would also offer him top-tier experience, albeit at a lesser level compared to England, and he would get exposure to European competition at Ibrox, with the ‘Gers firmly positioned in the top two in their league.

If Morelos leaves Rangers, that could open the door for someone like Brewster to feature regularly at Ibrox if Gerrard were to bring him in on loan. It would also enable the youngster to continue playing frequently at senior level under a manager who already knows him, so Whelan’s suggestion of a move to Rangers for the 20-year-old seems a sensible one.

Liverpool fans, do you agree with Whelan’s belief that Rangers could be an ideal loan destination for Brewster or would you rather see him going on loan to an English Premier League club next term? Join in the discussion by commenting below!