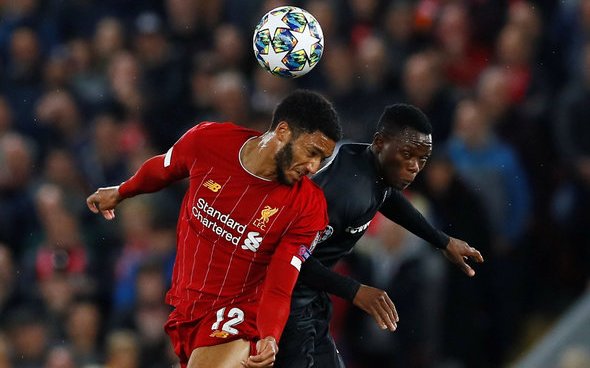 When writers from The Athletic named their Premier League Men’s Team of the Year over the weekend, three Liverpool defenders made the cut – but it was the one Reds defensive regular who was omitted that subsequently drew glowing praise from Jamie Carragher.

Virgil van Dijk, Trent Alexander-Arnold and Andrew Robertson all made that journalistic XI yet it was the contribution of Joe Gomez which was lauded by the former Reds defender.

Speaking about the 22-year-old on Sky Sports‘ The Football Show [via Liverpool Echo], Carragher said: “I think this season, his performances can go alongside, or certainly on par with Virgil van Dijk’s throughout this season.

“He hasn’t actually lost a Premier League game this season, he didn’t play at Watford, and I think I have always said on Sky that, at times, you can play your best games as a player but when it’s when you don’t play. That was certainly one of those – when (Dejan) Lovren played and Troy Deeney caused them all sorts of problems, and Virgil van Dijk wasn’t at his best.”

Carragher’s comparison of Gomez’s 2019/20 performances with Van Dijk does indeed have some justification. The England youngster has won more tackles (0.9 to 0.8) and made more interceptions (1.3 to one) per game than his Liverpool centre-back partner, yet it is another statistic which truly highlights just how impressive the 22-year-old has been throughout the season.

The Sky Sports pundit alluded to the Reds’ defeat at Watford when Gomez was ruled out with a minor injury and Lovren came into the team alongside Van Dijk. Jurgen Klopp’s team lost their unbeaten Premier League record in galling fashion that night, being on the wrong end of a 3-0 hammering, and Lovren was pilloried by numerous Liverpool fans over his performance at Vicarage Road.

Carragher’s point about Gomez being missed against the Hornets is quite pertinent and yet it was no one-off occurrence – it actually reflects a trend which has been borne out since the start of the season.

Liverpool have conceded 21 Premier League goals in the current campaign, during which Van Dijk has been ever-present. They have only shipped five goals in the league when Gomez has been on the pitch – one against Norwich on the opening day, one at Wolves in January, two against West Ham a month later and one in the home win against Bournemouth (as per TransferMarkt). Even that latter one was contentious as he appeared to have been shoved forcefully off the ball by Callum Wilson in the lead-up to the Cherries striker’s goal (as per BBC).

Gomez appeared as a late substitute in five league games in which the Reds have already been deprived of a clean sheet and did not concede any further. Indeed, since starting in the 3-0 win at Bournemouth in December (his first league start since the opening day), the only game he has missed was the defeat at Watford. That victory away to Eddie Howe’s side commenced an extraordinary sequence in which Liverpool conceded only one goal in 11 Premier League games, having shipped 11 in the preceding 11 matches. [via TransferMarkt]

Van Dijk has played all 2,610 minutes in the league this season, which equates to one goal conceded for every 124.29 minutes when he has played. Gomez has clocked up 1,276 Premier League minutes and the Reds have let in just five goals with him on the pitch, one for every 255.2 minutes.

It hardly seems coincidental that Liverpool’s defence tightened up considerably following the youngster’s recall to the team and, for all of Van Dijk’s excellence, Carragher is quite right to point out that Gomez has been just as worthy of recognition this season.

Liverpool fans, do you think Gomez has been as good as, if not better than, Van Dijk in the 2019/20 season? Comment below with your views!