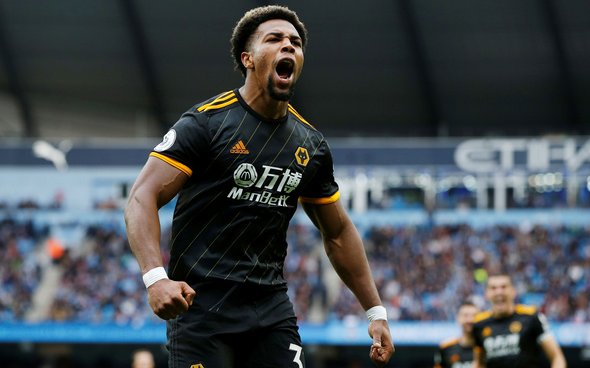 Former England goalkeeper Paul Robinson believes that Liverpool will follow through on their reported interest in Adama Traore and bring the 24-year-old to Anfield in the summer.

Football Insider reported last week that the Reds had identified the Wolves winger as a possible signing if either Mohamed Salah or Sadio Mane were to leave Merseyside. However, the ex-Tottenham ‘keeper feels that Liverpool could make a move for him even if neither of their African forwards depart.

Speaking about Traore to Football Insider, Robinson said: “I think it is somebody Liverpool will be looking at anyway. Traore has had an outstanding season. I do not think anybody has improved in the Premier League like he has – so visibly.

“From running down blind alleys with no end product to scoring goals, finding intelligent passes and consistently delivering end product with his unbelievable speed. He is causing defenders all sorts of problems. Nobody knows whether to drop off or come tight because either way he gets past you. His development as a player and an athlete has been great to watch. I can see Liverpool signing him.”

Robinson makes a valid point about the improvement in Traore’s game from when he joined Wolves in 2018 to now. In his first season at Molineux, the winger admitted in an interview with The Guardian that his end product needed improvement – he ended the campaign with only one goal and three assists, having frequently been deployed as a substitute rather than being trusted by Nuno Espirito Santo to start. He also averaged a paltry 9.3 passes per game in the league last season.

In 2019/20, though, Traore has been a different animal. He has contributed six goals and 10 assists for Wolves and has duly earned Nuno’s trust, starting 22 Premier League matches this term. His match average for key passes has risen to 1.4 from the 0.6 of last season and, as noted by Marca [via talkSPORT], he has added substantial muscle to accompany his blistering pace – a report from Birmingham Live claimed that he is the fastest player in the English top flight, recording a sprint of almost 23 miles per hour.

Liverpool manager Jurgen Klopp will surely have noted the threat that the 24-year-old possesses, having seen him first-hand in the Reds’ narrow 2-1 win at Molineux in January. He set up Raul Jimenez’s equaliser that night with a pinpoint cross and, as noted by BBC reporter Phil McNulty, his “power and pace gave Andrew Robertson a very uncomfortable night”.

Therefore, Robinson is right to allude to Traore’s marked improvement over the last number of months, and the winger’s enviable blend of power and pace could indeed push Liverpool to seriously consider a summer move for him.

Liverpool fans, do you agree with Robinson’s assessment of Traore? Would you like to have the Wolves winger at Anfield next season? Share your views in the comments section below!