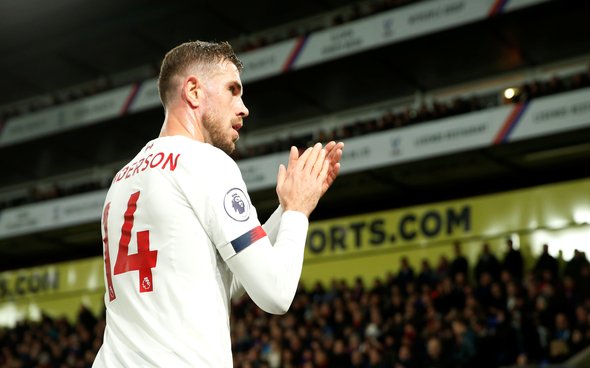 Plenty of Liverpool fans have given their reaction to a column in The Mirror in which former Reds striker Stan Collymore called for current Anfield captain Jordan Henderson to be included in the New Year Honours list.

The 49-year-old made the claim in the wake of the midfielder’s efforts in the establishment of the #PlayersTogether initiative, which aims to provide funding and support to frontline NHS workers during the coronavirus pandemic. A report in The Times stated that Henderson had initiated contact with other Premier League captains to try and arrange a fund for healthcare staff working on the frontline and several of his professional peers publicly alluded to the proactive role he took in helping to set up #PlayersTogether.

Stan Collymore: “When the New Year gongs are announced we should be hearing Jordan Henderson OBE or MBE – simple as that.

“The conscience he has shown football these past couple of weeks is more important than any trophy he will ever lift for Liverpool.”

In his column for The Mirror, Collymore wrote: “When the New Year gongs are announced we should be hearing Jordan Henderson OBE or MBE – simple as that. Because the conscience he has shown football these past couple of weeks is more important than any trophy he will ever lift for Liverpool. Henderson has been the driving force behind the Players Together campaign and no one should underestimate the work he will have had to put in.” Those words were later shared on Twitter by @AnfieldEdition.

If Henderson is named in the next Honours List, he will follow in the footsteps of ex-Liverpool captain Steven Gerrard OBE and his former Reds manager Sir Kenny Dalglish, as well as England team-mate Harry Kane, in receiving UK honours. These Liverpool fans on Twitter joined Collymore in saluting the Anfield skipper:

Your not wrong Stan….

Henderson a true leader and gentleman

If Kane gets one for scoring a few penalties, Henderson definitely deserves one.

He leads from the front unlike the man whom the media campaign for him to hand the England captaincy to.

Should be England captain as well..

Liverpool fans, do you think Henderson would be worthy of MBE or OBE recognition given his work in the foundation of #PlayersTogether? Let us know your views in the comments section below!